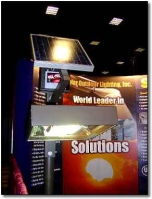 [Product News Brief ] Solar outdoor lighting company SOL announced that they received an ISO standard designation, which emphasizes continued improvement of their products and requires the company to show evidence of system performance. The designation came in the form of an ISO 9001:2000 Certificate of Registration from International Management Systems, in Tampa, Florida. For fifteen years SOL has been making solar systems for street and pathway lights, parking lot and billboard lights, transit shelter and bus stop lights, security lights, home systems, and solar electric power systems for thousands of customers in over 35 countries on six continents. The company has become the largest supplier of solar lighting systems to the Federal Government, and SOL’s solar lighting systems illuminate hundreds of federal facilities including the pier and walkways at the Statue of Liberty, the Arizona Memorial at Pearl Harbor, the perimeter of Cape Canaveral and bases of every branch of the US Military.