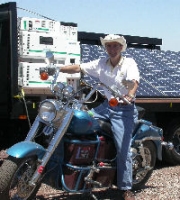 “Akeena Solar Goes Nuclear, Opposes California’s Million Solar Roofs Bill.” Good headline, huh? And it’s true. The bill that would have made California a world leader in solar energy has been ruined by a partisan payoff to unions.

As a licensed solar contractor and board member of the California Solar Energy Industries Association, I have been working on this bill for more than two years. It would levy a small surcharge on customers’ electricity rates to finance incentives for homeowners and businesses to install clean solar power. Gov. Arnold Schwarzenegger was wholeheartedly behind it, along with a bipartisan coalition of senators, a consensus reflected in its designation as SB 1. But literally within days of the return of rolling blackouts to California, SB 1 was amended in such a way that even the solar contractors themselves — who have been doing solar work in the state for more than 20 years — now oppose it. Why? Union special interests have managed to hijack this bill by requiring that “prevailing wages” — essentially union wages — be paid for all future solar work done in the state. Moreover, the bill will make it illegal for specialized solar contractors to install systems unless they are also certified electricians, a level of expertise inappropriate for rooftop solar work. As a result, Sen. John Campbell, R-Costa Mesa, a co-author of the bill, has withdrawn his support. The most recent vote, Aug. 25 in the Assembly Appropriations Committee, was along party lines, with Democrats in support and Republicans now opposed. Even if the bill clears a full vote of the Assembly, these union provisions are likely to force Schwarzenegger to veto his own solar bill. By promoting the adoption of solar energy, SB 1 obviously would have been good for my business. But in its original form it would have been good for California as well. The goal was to spur the installation of 3,000 megawatts of electrical generating capacity (approximately the power from 1 million residential rooftop systems). This power is equivalent to five new generating plants the size of San Jose’s Metcalf Energy Center. Akeena Solar calculates that the bill would provide more than $6 billion in benefits to the state’s power grid, environment and economy, even after accounting for the cost of incentives. Requiring the payment of prevailing wages on California’s solar work will increase costs to the state by $755 million over the course of the program. This is a direct transfer of money from California ratepayers to unions. The provision forces customers to pay more for their solar systems and requires non-specialized contractors to do the work. Although this may be politics as usual in Sacramento, turning this bill into a partisan power grab is bad for our energy infrastructure, bad for our environment and bad for our economy. It is a difficult decision for solar contractors to oppose our own bill. But we refuse to see our industry hijacked. –Barry Cinnamon is president of Akeena Solar in Los Gatos, which designs and installs residential and commercial solar electric systems. He wrote this article for the San Jose Mercury News.