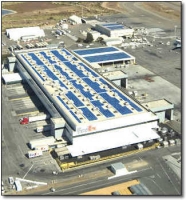 The solar-power installation will fuel 80 percent of the hub facility’s energy needs, substituting the sun for fossil fuel and other sources of electricity. At peak output, the system will produce the equivalent of power used by more than 900 homes during the daytime. In addition to generating electricity, the solar panels help insulate the buildings, reducing heating and cooling costs. “The solar-electric system at our Oakland hub powers one of our major FedEx Express hubs, which handles more than 260,000 packages daily and serves as a major gateway for shipments to and from Asia,” said Mitch Jackson, managing director, corporate and international environmental programs, FedEx Express. “This is one more example of how FedEx implements innovative yet practical solutions that are good for business and the environment.” The system will reduce demand on the utility grid and will serve as an additional source of power capacity to benefit businesses and residents of California. During periods when the energy generated by the system is greater than is needed to power the facility, the surplus energy will be transferred into the utility grid for general use. California-based PowerLight Corporation designed and built the system. The company has been behind many of the largest solar arrays throughout California and the world. To power the facility, FedEx Express flew more than 300,000 Sharp solar cells from Japan to a Sharp facility in Memphis, Tennessee where they were installed into 5,769 photovoltaic modules that convert sunlight directly into electricity. FedEx then trucked the finished modules over to the California facility. The system encompasses virtually the entire 81,000 square foot area of roof across the facility’s two buildings. “Large companies are now making projects like this acceptable”, said Ron Kenedi of Sharp Solar, based in Huntington Beach, California. “This is an excellent example of leadership by top global companies like Sharp and FedEx working together to create models that others can replicate to improve the bottomline, and our planet as well”. The solar project is one of many environmental initiatives FedEx has rolled out in recent years. In 2000, FedEx Express became the first company to make a long-term commitment to introduce hybrid-electric delivery trucks into the market. The vehicles were developed in partnership with Environmental Defense and Eaton Corporation. Today, there are more than 18 FedEx Express hybrid-electric vehicles in operation in neighborhoods across America, the largest hybrid-powered courier vehicle fleet in the United States. FedEx recently announced plans to place an additional 75 hybrid vehicles into service in the next year. FedEx Kinko’s initiatives include energy conservation, buying renewable power, using and promoting the sale of recycled products, and minimizing and recycling waste.