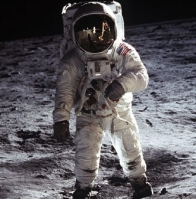 New Hampshire, USA — The solar industry has a new star straight from the moon.

Buzz Aldrin walked in the footprints of that “One Giant Leap” in 1969 when he followed mission commander Neil Armstrong off Apollo 11 to become the second human to set foot on the moon. While the landing cemented his standing as a national and cultural icon, his career didn’t stop there. Now, his latest venture puts him on the ground floor as a senior advisor to a young solar company with big, shoot-for-the-moon ambitions.

The company is Texas-based Principal Solar, and so far they’ve made relatively few waves in the solar market. But they have landed some notable titans as they slowly work to build their credentials within the industry. Aldrin heads that list. According to Principal Solar CEO and Chairman Michael Gorton, the retired astronaut brings with him considerable engineering and business know-how. More than anything, though, he comes with a world-class Rolodex and an instant VIP pass. Certainly less well-known, but likely even more influential in energy circles is Hunter Hunt, president and CEO of Hunt Consolidated Energy and a member of the powerful Hunt family, which has decades-long roots deep in the oil fields of Texas.

“If you can reach decision makers, you can solve problems,” said Gorton on how figures like Aldrin and Hunt can help his business. “It is those kinds of assets that help you continue accelerated growth.”

Gorton hopes that acceleration will take the company from its current walking start to mach speed within a handful of years. The publicly traded company’s primary goal is to grow through acquisitions of power generating facilities with established power purchase agreements, mostly in areas with strong incentives and high electricity prices. So far they have purchased two very small developments in the Northeast totaling less than 220 kilowatts. Gorton says the company is now in discussions to purchase developments twice that size, and by 2012 he expects all their acquired developments will be larger than 1 megawatt.

Still, that size pales in comparison to what it hopes to achieve.

“We believe grid parity is happening within three to five years,” said Gorton. “When that happens, lots of solar power generation, at large-scale, will be built. So what we want to do as a company is build an entity that has hyper-growth today so that we are the largest solar company in the country when grid parity arrives. We’re doing the acquisitions so we can grow.”

Gorton, who calls himself a “serial entrepreneur,” has left a trail of success spanning the telecommunications and health care industries. Earlier in his career, he founded Internet Global Services, a company that delivered the first DSL network. His most recent company was TelaDoc, a 24/7 service that provides medical consultations over the phone. Gorton worked with Aldrin for the first time while at TeleDoc.

“There’s a long-standing relationship between Buzz and I,” said Gorton. “In one of companies I was building, a sales guy claimed he knew him, so I invited myself to meet him back in ’06. We had good chemistry, so we started doing things together.”

Now, they’ll turn their sights on the solar industry, which Gorton sees as having profound potential to transform our future. To illustrate his argument, he points to his iPhone.

“When I looked at the solar power industry, what I saw was something brand new that is very much like the semiconductor industry,” he said. “If you had an iPhone in the 1960s, to have that much processing power and that much memory would have required a 50-story building two blocks wide. And it would have cost a trillion dollars to build. The reason you can carry that around in your pocket is the silicon revolution, and there’s a second silicon revolution that’s going on with solar right now. There’s a lot of people that still don’t believe that solar can compete in the mainstream. And I love those people. They’re people I don’t have to compete with.”

In the meantime, he’ll be using industry insiders like Hunter Hunt and international icons like Buzz Aldrin to reach new audiences and new streams of investment. Of course, Gorton does realize that 1960s fame does have its limitations, though he’s quick to point out that Aldrin has been able to span that generation gap in ways large and small.

Gorton recounts a lunch he had recently with a space-buff friend, who had asked for a signed photo of Aldrin. Gorton got the signature on the famed moon landing photo — the one that has been further popularized by MTV since its launch in 1981 — and he brought it to the restaurant where he was meeting the friend.

As Gorton remembers it, the waiter came to the table, saw the photo and said, “Dude, you got the MTV logo. Who signed it for you?”