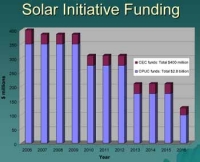 Los Angeles, California [RenewableEnergyAccess.com] What could well be the most significant U.S. solar news for all of 2006 is likely to happen this week in California as state regulators are expected to pass the largest solar energy policy package ever seen in this country.

On Thursday the California Public Utilities Commission (PUC) is widely expected to vote to approve the California Solar Initiative (CSI), which will secure USD $3.2 billion for solar energy rebates in the state for the next 11 years. The scheduled vote follows a previous vote taken in December in which the PUC unanimously approved $300 million in interim funds for solar power systems installed in 2006. This week’s vote will complete the package by formalizing and providing funds for the next decade, a long-term plan that is expected to greatly bolster the solar industry in California and beyond. Rebates beginning this year will stay at the $2.80 per watt mark and will gradually decline for the following 10 years. By design, the rebates will decline by 10 percent per year through the duration of the program. The PUC rebates may also move from a capacity-based approach to a performance-based approach or some variation of the two. Details will be finalized over the coming months through stakeholder workshops. The CSI plan effectively supplants two of the critical features that were present in the ill-fated “Million Solar Roofs Initiative” or SB 1, which faltered twice in the California legislature. It provides the long-term rebate structure, which is important to spur solar equipment manufacturers to increase production, and it provides funds totaling $3.2 billion for the plan (PUC and CEC funds combined 2006-2017). The CSI plan does not include a mandate that new homes in California include solar energy, nor does it include any licensing changes to who is eligible to install solar projects in the state. It also does not require that solar installation work be done as so-called “prevailing wages,” essentially union wages. All three items exposed and exacerbated deep opposition between the majority of the solar industry and certain union interests that backed some of the proposals. The PUC policy is a top down approach and will be passed independently of the legislature — a major reason why it is expected to pass. Once passed into law this Thursday, industry experts predict the CSI will secure a stable solar market in California for the next 11 years that will lower the overall price of photovoltaics. The plan would be the largest solar energy policy ever enacted in the U.S. and the second largest in the world, behind Germany’s renowned rebates. Anticipating the passage of the CSI, The Vote Solar Initiative, one of the nation’s leading advocates for solar energy, has organized a celebration in the San Francisco City Hall later in the day. The event will include Mayor Gavin Newsom, Michael Peevey, President of the Public Utilities Commission, former EPA Director Bill Reilly and other special guests. The event will take place in the North Light Court, San Francisco City Hall at 4:30 on Thursday, January 12. Reception to follow. For more information, please contact Vote Solar’s Adam Browning at 415-874-7434. For more information use the following link.