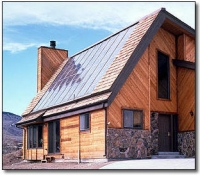 One of the most significant solar energy bills California has ever seen is on its way to the state’s assembly floor. The California Assembly Housing Committee passed a bill that would establish a minimum standard for builders to install solar photovoltaic (PV) systems on 15 percent of new single-family homes beginning in 2006, and increasing to 55 percent by 2010.

Sacramento, California – June 25, 2004 [SolarAccess.com] The bill, SB 1652, is authored by State Senator Kevin Murray (D-Los Angeles) and sponsored by Environment California, a state environmental organization. While the Schwarzenegger Administration has yet to take a position on the bill, the Governor has expressed support for building at least half of all new homes with solar power. In other words, this bill stands a good chance of becoming a reality in the California building energy industry. “Creating a minimum standard for builders is the most cost-effective way of increasing the number of solar powered homes,” said Bernadette Del Chiaro, Clean Energy Advocate for Environment California. “This bill would not only reduce thousands of pounds of air pollution each year, it would also save Californian’s money by preventing the need to build more natural gas power plants.” According to the California Building Industry Association, approximately 135,000 single-family homes will be built in 2006. Should California require a minimum of 15 percent of these homes be built with 2 kW solar PV systems, as called for in this bill, California’s solar market would increase by approximately 40 MW, equivalent to the size of a peaking power plant. “Building solar into the construction of a new home not only saves the homeowner money from reduced electric bills, but it also can save lives by reducing air pollution,” said Murray. “There’s no good reason why all of California’s new homes shouldn’t come with solar power, just like they all come with energy-saving windows and insulation.” Installing solar power during a home’s construction helps lower the cost of solar power, as well as reduce air pollution and meet anticipated energy shortages. Adding a solar energy system to a home or a retro-fit costs slightly more than if the solar array is designed with the initial building construction in mind. California is currently the third largest market for solar in the world, installing around 20 MW of grid-connected solar PV systems each year. Other countries, such as Japan and Germany, are already building thousands of solar homes installing approximately 300 and 200 MW of solar, respectively, each year. According to California Air Resources Board statistics, 40 MW of solar power would reduce air pollution by 34 million pounds each year, the equivalent to removing 2,800 cars from the road. Solar performs best at midday during hot and sunny temperatures, which is the most common time for blackouts since the electricity grid is most stressed at those times. Solar helps the overall integrity of the electrical grid. “Some of the world’s best-known manufacturers, such as Sharp and GE, are today’s leading manufacturers of solar power,” said Del Chiaro. “The need is there, the technology is ready. All we need is for the developers to be part of the solution by building solar homes. This bill ensures this happens in the most cost effective manner.”