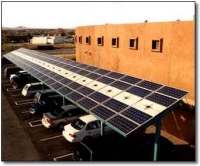 Sacramento, California [RenewableEnergyAccess.com] It’s getting down to the wire for the future of solar energy in California. The Million Solar Roofs bill, SB 1, will be heard in Assembly Appropriations Committee today. Industry insiders expect the bill to be placed on the Suspense File and voted on later in the day.

The bill has passed two committees in the assembly, Energy and Housing, as well as the Senate. Today’s vote is the final committee hearing scheduled for the bill. If it passes, it will head to the Assembly Floor for a vote sometime before September 9, the last day of session. The bill, authored by Senator Murray, Senator Campbell and Assemblymember Levine, aims to build 3,000 MW of solar panels on a million roofs, including half of all new homes, in roughly ten years and represents the biggest solar bill in the country. Two major challenges are facing the adoption of SB-1, according to Barry Cinnamon, president of Akeena Solar, a solar systems installation company. The first challenge is that certain unions want all of the solar work in the state to be done using “prevailing wages” – essentially union wages. “When we ran our model using these prevailing wage rates the costs to the state for the Million Solar Roofs Initiative were increased by $750 million,” Cinnamon said. The higher union wages could effectively extinguish any cost savings for solar energy, which is SB 1’s larger objective. The second challenge, says Cinnamon, is simply that SB-1 replaces conventional utility power generation and distribution, pitting the influential utilities at odds with the effort. “It is understandable that utilities would like to continue generating and delivering this incremental power to customers,” Cinnamon said. “However, it is only by installing these systems on business and residential rooftops that costs for additional transmission and distribution systems can be avoided. Cinnamon was a major figure behind the release this week of a White Paper report entitled “The Economics of Solar Energy for California.” The findings show that the Million Solar Roofs Initiative (California Senate Bill #1) will save California over six billion dollars net of incentives. “The primary benefit of the Million Solar Roofs Initiative is that it reduces California’s power needs during hot summer weekday afternoons,” Cinnamon said. “Without this 3,000 MW of solar capacity, utilities must construct this generation, distribution and transmission infrastructure — as well as operate and fuel these plants. Ratepayers will ultimately pay for these costs. The White Paper is based on detailed analyses of solar market data from the California Energy Commission and California Public Utilities Commission, as well as similar data from the New Jersey Clean Energy Program, Hawaii Solar Program, Japanese Solar Program, and Germany Solar Program. Customer behavior and economic savings are modeled based on research done at Berkeley, Stanford, Princeton and Wharton. Tom Beach, Principal Consultant with Cross Border Energy, collaborated with Akeena Solar on this White Paper.