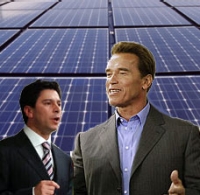 Governor Arnold Schwarzenegger’s administration, which supported the bill throughout, lost the political struggle with California assembly and in particular Speaker Fabio Nunez, D-Los Angeles. It now appears likely that the Governor will ask the Public Utilities Commission (PUC) to implement a solar program using SB 1 as a guideline. The PUC could act on the program as early as November, according Richard Costigan, the Governor’s lobbyist. “We can go to the PUC and implement the policy of SB 1, and that is where we will be going,” Costigan said. After being passed by California’s Assembly Appropriations Committee with what RenewableEnergyAccess.com earlier termed “bittersweet amendment changes aimed at appeasing various interest groups.” SB 1’s cost savings incentives for solar energy would have helped Californians install 3,000 MW of solar power capacity panels on homes and businesses over the next ten years, however, the amendments for prevailing wages and licensing splintered the bill’s support. [Editor’s Note: RenewableEnergyAccess.com will continue to update this report, and add expert commentary as it develops. Please use Reader Comments below to share your views.] Where Does California’s Million Solar Roofs Initiative Go From Here by David Hochschild, The Vote Solar Initiative Late Thursday night, the California’s Million Solar Roofs bill died when the Legislature ended the 2005 session. Originally proposed by Governor Schwarzenegger in 2004 and supported by legislators from both parties along with a broad range of solar industry, environmental and public interest groups, the bill would have created ten years of incentives for solar energy to help Californians install one million rooftop solar energy systems on our homes and businesses. Click to read the full article. Interview: Jan McFarland of PVMA and ASPV In the flurry of activity following the defeat of SB1 by the California Assembly RenewableEnergyAccess.com formed a quick conversation with Jan McFarland, Executive Director of both the Photovoltaic Manufacturer’s Association (PVMA) and Americans for Solar Power (ASPV), and formerly Executive Director of the California Solar Energy Industries Association. She devoted months to working up front and behind the legislative scene on SB1. Here’s what Ms. McFarland had to say: Click to read the full interview. Million Solar Roofs Bill Dies in California Assembly by Bernadette Del Chiaro, Environment California The Million Solar Roofs bill, the biggest solar power policy considered in the nation, was killed again by the California Assembly today after months of high-profile attention and bipartisan votes in both chambers. Click to read the full article.