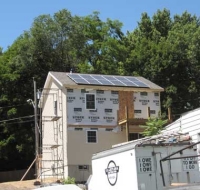 Albany, New York [RenewableEnergyAccess.com] You might think you were viewing a scene from the past if you had recently been in Albany, New York, to watch Habitat for Humanity and the Vermont-based company groSolar build a new solar-equipped home in only one day. Like an old-fashioned barn raising, the “house raising” combined the efforts of these teams to provide the American dream for yet another deserving family.

Of course, unlike the good old fashioned barn raising—power tools and solar panels were keys to this operation.

groSolar, a distributor of solar energy systems for both residential and commercial customers in the U.S., has partnered with New York State Energy Research and Development Authority (NYSERDA) to complete 15 residential solar electric systems for the Capital District Habitat for Humanity based in Albany, New York. Like the blitz build, the rest of the systems will be installed on houses built by Habitat in the capital district of New York.

“Energy is rapidly becoming one of the biggest expenses born by renters and home owners,” says Jeff Wolfe, CEO of groSolar. “With this system in place, the family living in this house will realize big savings—up to half of their electrical energy costs. groSolar is pleased to partner with Habitat for Humanity to make home ownership a reality for this family.”

The systems are partially funded by a cash incentive from the NYSERDA Power Naturally program, which provides financial incentives for New York State residents and businesses that utilize renewable energy systems. The cash incentive from NYSERDA reduces the cost, along with help from groSolar’s many solar product providers including PV modules from Evergreen Solar, to allow groSolar to partially donate the remaining parts and installation.

The systems will be installed with the help of students from the Ulster County BOCES Photovoltaic Practitioner Institute.

“Energy efficiency upgrades to homes are important measures homeowners can take in reducing electricity consumption, which will save money on electric bills,” said Peter R. Smith, President and CEO of NYSERDA. “With the addition of a Photovoltaic (PV) system, energy savings will be even greater, and each one of these new homeowners can be proud of the positive environmental impact they’re making to our state.”

The 2 kilowatt systems will be connected to the electrical panel in the houses where they are installed, and the house will remain connected to the NiMo utility system. This system will produce on average about 6 kilowatt-hours (kWh) per day. Most homes use approximately eight to twelve kWh of energy per day, so this system is expected to provide more than half of the home’s energy needs.

“Capital District Habitat already builds Energy Star rated homes in the city of Albany, and welcomes this opportunity to improve efficiencies and reduce energy costs for Habitat homeowners through this partnership,” stated Steve Haggerty, Executive Director of the Albany Habitat.

Haggerty said that he is seeking partners to support the installation costs for these systems which for Habitat will average about $1,000 per house. “These are 18 to 20 thousand dollar systems and for the cost of one system Habitat could install systems on 15 homes,” he added.