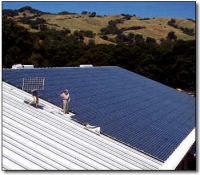 Boonville California [RenewableEnergyAccess.com] The Vineyards and wineries all seem to be doing it, so why not breweries too? Anderson Valley Brewing Company is currently installing the one of the largest private photovoltaic solar array north of the San Francisco Bay Area, at their brewery in Boonville, California.

As of June 7th, the company has completed the first phase of the $860,000 project, with the installation of 592 solar panels on the southern roof of their cellar and packaging facility. The second phase, construction of a second, freestanding ground-based array of 176 more panels, is expected to stared around the beginning of July and should be complete by the end of the summer. Once complete, the $860,000 project will include two arrays; a 175′ by 53′ array on the roof of the brewery’s cellar and packaging facility, and an auxiliary 120′ by 24′ ground-based freestanding array. The combined array will contain seven hundred-sixty eight 40″ by 57″ panels, each generating 187 watts per panel, for a combined output of 125,000 watts per hour at 480 volts AC, during the day’s five peak solar hours. Together, the 142 kW of installed arrays are expected to supply as much as one third of the brewery’s electricity. Advance Solar, of Calpella, California is conducting the installation. “This beats the largest job we’ve ever done by 50%.” said Advance Solar’s owner Pete Gregson. “When completed, Anderson Valley Brewing Company may have the largest solar array of any brewery in the world.” The array, which will eventually supply as much as a third of the company’s electricity, is the latest step in Anderson Valley Brewing Company’s effort to reduce, reuse, recycle, and minimize our effect on the environment. “We feel an obligation, specifically to this pristine valley in which we’re located, but to the rest of the world as well, to be responsible with resources,” said brewery president, Kenneth Allen. “We recycle as much of our waste as we can; paper, plastic, glass, cardboard. We have our own waste water reclamation system, and now we can greatly reduce our reliance on outside electricity.” For four of the last five years, Anderson Valley Brewing has received a WRAP Award, from the California Integrated Waste Management Board. The WRAP Award (Waste Reduction Awards Program) is awarded to businesses that take extra efforts to save energy and resources (Head Brewer, David Gatlin said they company forgot to send in the application in 2002).