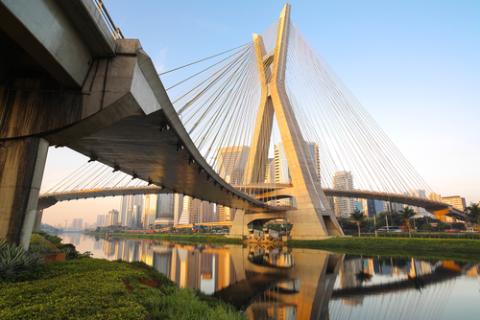 The country’s Energy Research Agency, known as EPE, and the state development bank BNDES are developing regulations now and may announce them “very soon,” Mauricio Tolmasquim, the head of EPE, said in a telephone interview yesterday.

Brazil gets less than one percent of its electricity from solar power and has almost no domestic photovoltaic production. The country is planning its first national auction in October for contracts to sell power produced from sunlight. Participants will need to see the local-content rules soon to prepare proposals, Tolmasquim said.

“We are now discussing the right dosage for the program, what would be the ideal level of requirement,” he said. “It can’t be too loose, otherwise we would have only Chinese equipment in the sector, but it can’t be too strict. Otherwise it would be impossible to have Brazilian-made equipment in such a short time. We have to encourage investments, without scaring companies.”

The policies will probably have low initial requirements that increase gradually, he said. Developers that use enough locally produced components in their solar farms will qualify for financing from BNDES, the development bank formally called Banco Nacional de Desenvolvimento Economico & Social. Brazil uses similar policies to promote domestic production of components turbines for its wind-power industry.

“The current situation for solar manufacturing in Brazil is standby. Foreign companies are waiting for the BNDES rules to decide whether they will build or not in Brazil,” Helena Chung, a Sao Paulo-based analyst for Bloomberg New Energy Finance, said in an interview today.

More than 70 percent of Brazil’s installed capacity comes from hydropower. As the worst drought in more than 50 years cuts output, the government is seeking to increase capacity from alternative sources.

The country expects to contract 3.5 gigawatts of solar power between 2014 and 2018. That would have sunlight producing about 1.8 percent of the country’s energy by 2023, said Tolmasquim, who is working on Brazil’s next 10-year energy plan, which EPE expects to issue in the coming months.

Developers will bid for 20-year contracts to sell power from solar farms with more than five megawatts of capacity in the so-called reserve energy auction in October. Past auctions included solar farms that competed directly against other sources of energy such as wind. This is the first that will have a separate category only for solar power. Participants must register by July 10.

In Brazil’s energy auctions, the government sets a ceiling price and developers bid down the price at which they will sell electricity. The ceiling price for the October auction hasn’t been announced yet.

“The financing issue is important to increase solar generation in Brazil,” Tolmasquim said. “As was the case with wind energy, solar energy is starting the process of gaining scale and lowering prices in Brazil.”