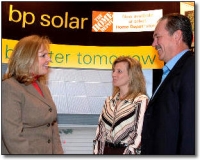 San Francisco, California – [RenewableEnergyAccess.com] BP Solar announced three projects aimed at strengthening its position in the global solar photovoltaic (PV) market. These projects include doubling the plant capacity at its Frederick, Maryland plant, teaming up with The Home Depot to market BP Solar home systems, and renewing its corporate sponsorship of the U.S. Department of Energy’s (DOE) 2005 Solar Decathlon.

First, BP Solar is responding to increasing demand for solar systems by investing over US$25 million in the expansion of its Frederick, Maryland facility. The expansion enables BP Solar to strengthen its position primarily in two key markets, Europe and the U.S., and supports its strategic growth plan to increase its global production capacity from 90 MW to 200 MW by the end of 2006. The Frederick expansion more than doubles the facility’s cell and module manufacturing capability. It also allows BP Solar to remain the largest North American producer of solar silicon wafers by expanding its casting and wafering capacity. Cell, module, casting and wafering growth will be complete by the end of 2005. The company expects to break ground before the end of the year. “The expansion of Frederick is good for BP Solar because it will enable us to continue to grow market share in our key US markets,” said Mary Shields, BP Solar North America Regional President. “There are also very important local benefits since this expansion will allow us to increase our local workforce by 28 percent over the next year.” Second, to make it easier for The Home Depot customers to purchase a solar system, The Home Depot and BP Solar have introduced a program to offer BP Solar Home Solutions, complete installed solar home power systems, through selected The Home Depot stores in southern California. The program enables a wide range of customers to obtain complete solar home power systems that can reduce electrical bills and increase home values without adverse impacts to the environment. The program will debut in over 40 stores in the San Diego, Riverside, and San Bernardino areas with plans to expand to additional stores in Orange and Los Angeles counties in November. The program is slated to continue its expansion in 2005 to additional US markets such as northern California, New Jersey, New York, and Hawaii. “Our agreement with The Home Depot affords us a program with one of the most respected home retailers in the US and a win-win situation for both: it allows The Home Depot to offer a reliable solar home system from BP Solar and allows us the ability to reach homeowners who are interested in improving their homes with quality products,” said Geoff Slevin, BP Solar US Marketing Director. Third, BP again has become a major sponsor of the DoE’s 2005 Solar Decathlon. BP also sponsored the first Solar Decathlon in 2002. The Solar Decathlon is a university competition in which engineering and architectural teams from participating schools design, construct, transport and erect completely sustainable individual solar homes and display them on the National Mall in Washington, D.C. Each entry is judged on ten criteria including style, innovation, and efficiency. As in 2002, BP Solar will offer university teams discounted solar materials and technological counseling. BP also will support the event through activities such as hosting functions, sponsoring team gifts and awards, providing volunteer support, and conducting media outreach. In 2005, BP joins The Home Depot, the National Association of Homebuilders, and the American Institute of Architects in sponsoring the Solar Decathlon.