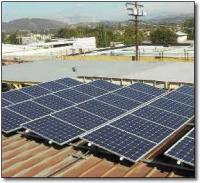 San Diego, California [RenewableEnergyAccess.com] Borrego Solar completed the first commercial solar electric installation in the City of El Cajon for California Metals and Electronics Recycling Center, a 32 kW solar electric system. At peak sunlight, the system will produce 32 kW of power, equivalent to the power used by 13 average households. Commuters headed east on Highway 8 will have a view of the solar array as they drive through El Cajon.

Ever since the California Energy Crisis of 2001, Jerry Turchin and his son Joshua Turchin, owners of Cal Metals, have been troubled by the high operating costs of electricity provided by the local utility company, San Diego Gas & Electric (SDG&E). When Cal Metals started operations in 1978 their electricity rates were $.02769 per kWh. In 2000, Cal Metals saw their electricity rates as high as $.07449 per kWh. In recent months their electricity rates have been an average of $.16665 per kWh resulting in bills averaging over $850. “Our electricity bills were unbelievable,” Turchin said. “They were always changing, usually for the worse, and we felt powerless.” The Turchins had decided to do something about their predicament because electric bills over $1,000 were not in the budget. “We were convinced there must be another way,” Turchin said. “We were not just going to become comfortable or used to such astronomical electricity prices that were increasing all the time.” The Turchins had looked into solar electricity in the past and found it to be cost-prohibitive but this time they gave it another chance. They contacted Borrego Solar which outlined how current projects, particularly when factoring in new state incentives, are much more cost effective than in years past. “Borrego Solar showed us how the price of solar components has come down by more than 25 percnt; the financial incentives are too good to pass up,” Turchin said. The Turchins are able to realize significant savings through: a federal tax credit of $14,000; California state tax credit of $9,600; accelerated depreciation savings of $59,000 and a state rebate of over $140,000. “When we looked at the numbers, we realized we could finance the system and pay less every month for our loan payment to pay off the solar than we would have paid to SDG&E,” Turchin said. “Now that we are energy independent, we don’t really care what the utility is charging for electricity. With a 25-year warranty on the solar modules, we’re covered for quite some time.” The system is comprised of 153 GE (formerly AstroPower) and 72 RWE Schott 165-watt solar modules, and made use of four SMA Sunny Boy 2500 watt inverters and one Xantrex 30 kW inverter. The new solar system output generates 172 kWh per day, over 62,000 kWh per year – and accounts for 100 percent of the center’s electricity bills. The system is grid-tied and allows the center to take advantage of net metering. First the solar electricity feeds the onsite loads then any excess power is then fed into the grid, spinning the meter backwards and crediting Cal Metals’ account. No batteries are used. “The use of solar energy fits perfectly with our own mission of transitioning society into a sustainable model of commerce,” Turchin said. “We can no longer afford to sacrifice our long-term environmental health in the name of short-term convenience.”