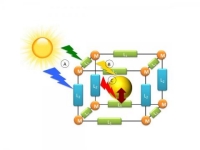 Researchers at Sandia National Laboratories have received a $1.2 million award from the U.S. Department of Energy’s SunShot Initiative to develop a technique that they believe will significantly improve the efficiencies of photovoltaic materials and help make solar electricity cost-competitive with other sources of energy. 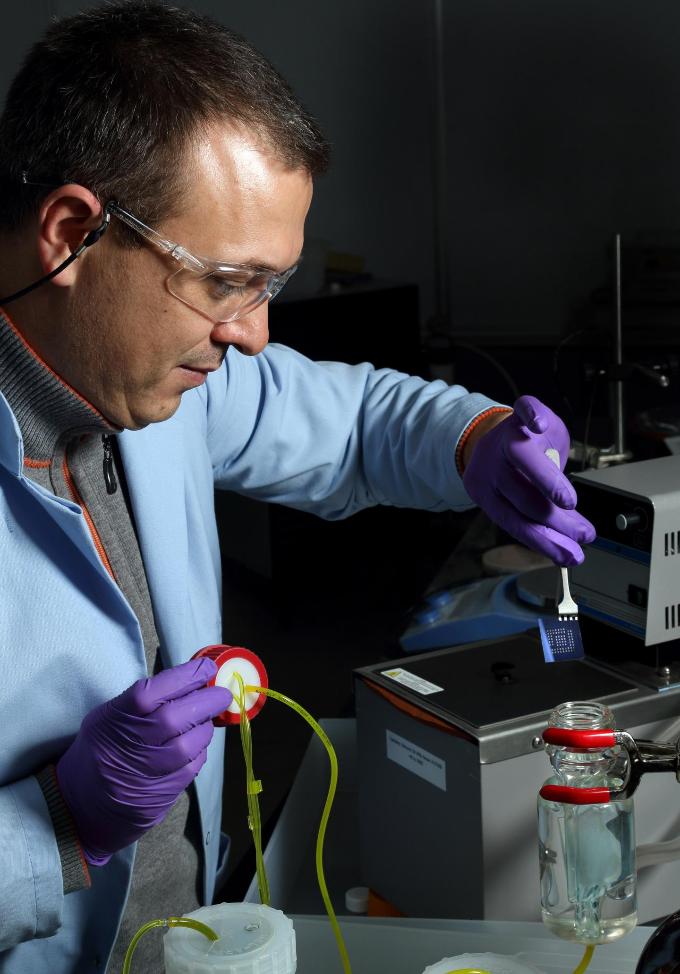 The work builds on Sandia’s recent successes with metal-organic framework (MOF) materials by combining them with dye-sensitized solar cells (DSSC). “A lot of people are working with DSSCs, but we think our expertise with MOFs gives us a tool that others don’t have,” said Sandia’s Erik Spoerke, a materials scientist with a long history of solar cell exploration at the labs.

Sandia’s project is funded through SunShot’s Next Generation Photovoltaic Technologies III program, which sponsors projects that apply promising basic materials science that has been proven at the materials properties level to demonstrate photovoltaic conversion improvements to address or exceed SunShot goals.

The SunShot Initiative is a collaborative national effort that aggressively drives innovation with the aim of making solar energy fully cost-competitive with traditional energy sources before the end of the decade. Through SunShot, the Energy Department supports efforts by private companies, universities and national laboratories to drive down the cost of solar electricity to 6 cents per kilowatt-hour.

A Baseline for Solar Production Advancements

Dye-sensitized solar cells, invented in the 1980s, use dyes designed to efficiently absorb light in the solar spectrum. The dye is mated with a semiconductor, typically titanium dioxide, that facilitates conversion of the energy in the optically excited dye into usable electrical current.

DSSCs are considered a significant advancement in photovoltaic technology since they separate the various processes of generating current from a solar cell. Michael Grätzel, a professor at the École Polytechnique Fédérale de Lausanne in Switzerland, was awarded the 2010 Millennium Technology Prize for inventing the first high-efficiency DSSC.

“If you don’t have everything in the DSSC dependent on everything else, it’s a lot easier to optimize your photovoltaic device in the most flexible and effective way,” explained Sandia senior scientist Mark Allendorf. DSSCs, for example, can capture more of the sun’s energy than silicon-based solar cells by using varied or multiple dyes and also can use different molecular systems, Allendorf said.

“It becomes almost modular in terms of the cell’s components, all of which contribute to making electricity out of sunlight more efficiently,” said Spoerke.

Though a source of optimism for the solar research community, DSSCs possess certain challenges that the Sandia research team thinks can be overcome by combining them with MOFs. 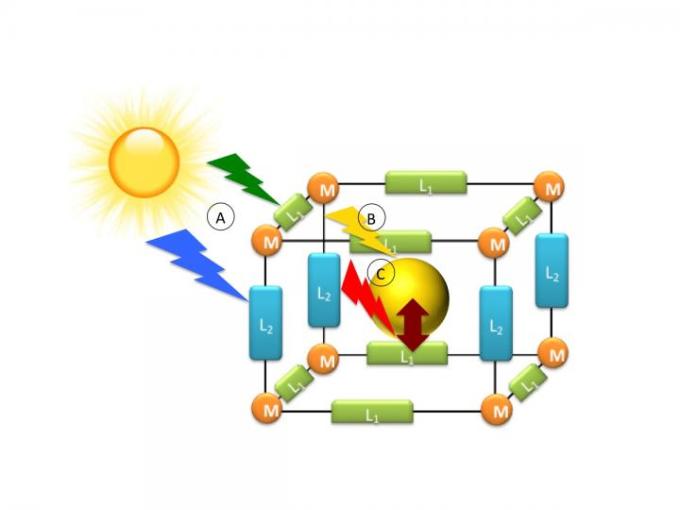 This is the key for this image — M: metal ions; L1,L2: linkers; yellow sphere: guest molecule. The modular, multifunctional structure provides three possible light harvesting mechanisms in MOFs: A) one or more organic linker types within a framework B) light-absorbing guest molecules in the pores; C) charge transfer interactions between guest molecules and MOF linkers that produce new absorption to the red of the isolated guest and linker. Credit: Sandia National Laboratories

Allendorf said researchers hope to use the ordered structure and versatile chemistry of MOFs to help the dyes in DSSCs absorb more solar light, which he says is a fundamental limit on their efficiency.

“Our hypothesis is that we can put a thin layer of MOF on top of the titanium dioxide, thus enabling us to order the dye in exactly the way we want it,” Allendorf explained. That, he said, should avoid the efficiency-decreasing problem of dye aggregation, since the dye would then be locked into the MOF’s crystalline structure.

MOFs are highly-ordered materials that also offer high levels of porosity, said Allendorf, a MOF expert and 29-year veteran of Sandia. He calls the materials “Tinkertoys for chemists” because of the ease with which new structures can be envisioned and assembled.

Allendorf said the unique porosity of MOFs will allow researchers to add a second dye, placed into the pores of the MOF, that will cover additional parts of the solar spectrum that weren’t covered with the initial dye. Finally, he and Spoerke are convinced that MOFs can help improve the overall electron charge and flow of the solar cell, which currently faces instability issues.

“Essentially, we believe MOFs can help to more effectively organize the electronic and nano-structure of the molecules in the solar cell,” said Spoerke. “This can go a long way toward improving the efficiency and stability of these assembled devices.”

In addition to the Sandia team, the project includes researchers at the University of Colorado-Boulder, particularly Steve George, an expert in a thin film technology known as atomic layer deposition.

The technique, said Spoerke, is important in that it offers a pathway for highly controlled materials chemistry with potentially low-cost manufacturing of the DSSC/MOF process.

“With the combination of MOFs, dye-sensitized solar cells and atomic layer deposition, we think we can figure out how to control all of the key cell interfaces and material elements in a way that’s never been done before,” said Spoerke. “That’s what makes this project exciting.”