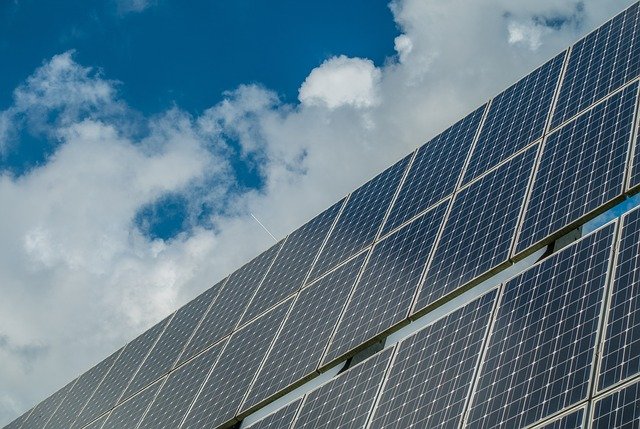 Public Service Company of New Mexico (PNM) will begin construction work as soon as January on a massive buildout of utility-scale solar generation and power storage projects in the shadow of the coal-fired San Juan Generating Station (SJGS) near Farmington.

PNM executives anticipate the projects, which will total 950 megawatts (MW) of generation and companion storage, will come online in stages around the time SJGS is retired in late June of 2022.

The initiative seriously undercuts a plan to keep the 847-MW SJGS alive under a long-shot carbon-capture retrofit being promoted by elected officials in the City of Farmington and Enchant Energy. It comes also as electricity-generation nationally is moving directly from coal to less expensive renewables, skipping what was long seen as the “bridge fuel” step around gas-fired generation. (1)

PNM’s plan, contained in a regulatory filing published last week, details its intentions for complying with the state’s Energy Transition Act, which calls for 50% of the state’s electricity—from investor-owned utilities and rural co-ops alike—to come from renewables by 2030 and 80% by 2040. (2)

It will be seen industrywide as a fresh indication—on top of many others—of where regional and national energy markets are quickly moving. (3, 4, 5, 6, 7, 8)

A Sept. 28 filling (9) by PNM with the New Mexico Public Regulation Commission (PRC) details power purchase agreements the utility has in place on four utility-scale solar generation and storage projects to replace SJGS generation. The deals, which total almost 1 gigawatt, collectively rival the biggest renewable energy projects in the U.S. They are with San Juan Solar 1 LLC (200 MW of generation and 100MW of battery storage), 201LC 8m LLC (100MW and 30MW, respectively), Arroyo Solar LLC (300MW and 150MW) and Jicarilla Solar I LLC (50MW and 20MW).

The table below, from the PNM filing, details each project and includes PNM projections on the economic impact of the solar buildout.

Of note from the above are the following:

The PRC already has approved the Arroyo and Jicarilla projects. It has not yet acted on the San Juan Solar and 201LC 8M deals but is likely to approve them, as well, given the order it issued this summer directing PNM to procure San Juan replacement power from utility-scale renewables. PNM is pressing for a decision on the latter two deals by Dec. 4 so that it can begin construction in January in time for a June 2022 commissioning. (10) All of the projects are located within the boundaries of the Central Consolidated School District, a decision that will replace local public tax revenues that would otherwise be lost to the closure of SJGS.

The PNM initiative puts the utility in step with the ongoing transition in U.S. electricity-generation markets while also meeting state expectations around reinvestment in the communities most directly affected by the transition away from coal-fired power.

Because PNM is one of the largest electricity market players in the region, its shift will influence other electricity providers in the West and the Southwest, many of whom are facing the same market and policy pressures as PNM.

One detail of additional special note in the PPAs are the wholesale prices. The Arroyo project comes in at $18.65 per megawatt-hour (MWh), the Jicarilla project at $19.73, the San Juan Solar I and Jicarilla Solar I, respectively, at $26.65 and $27.35.

By comparison, coal-fired generation runs $66 to $112 per MWh (11), based on Lazard’s most recent annual assessment of energy costs, and combined-cycle gas-fired generation is $44 to 64 MWh, the latter range being a clear consideration in a PRC directive to PNM in July (12) to develop renewables over gas in its replacement-power configuration for San Juan.

Moody’s Investors Service on Sept. 22 concluded that state renewable-energy mandates like New Mexico’s will drive the uptake of renewables (wind and solar mainly) by 65% over the next 10 years to “at least” 28% of total U.S. electricity generation from 17% today. This will likely prove a conservative figure, as the buildout of more big solar arrays and wind farms will include technical innovations and new efficiencies that will make these resources even cheaper and more competitive than they are now.

Investor preferences are also driving change, as noted by Standard & Poor’s global ratings managing director, who said publicly on Oct. 6 that investors are “sick of” traditional energy strategies and “are looking for more stability, and they want to see a greater percentage of capex budgets being spent on renewables.” (13) Market signals support this assessment. The Invesco Solar ETF, which holds 23 solar or solar-related companies and is one strong indicator of investor sentiment, is up 120% (14) this year.

Another blow to proposed carbon-capture retrofit

The PNM power-replacement plan, in combination with an array of industrywide changes, all but dooms any chance of success for the San Juan carbon-capture proposal. The retrofit was riddled already with numerous holes in its business plan, which overlooked such fundamental questions as to who would buy the power from such a complicated and high-priced project, how it would be transmitted, and who would finance it.

Enchant is essentially being beaten to the punch by PNM, which aims to have its replacement solar farms in place at least a year (15) before Enchant executives say its retrofit—under a very optimistic and unlikely timetable—would begin to operate.

“New Mexico is known for being transmission constrained,” PNM notes. (18) All of the access attached to San Juan is spoken for, owned, in addition to PNM, by Tucson Electric Power Company (20%), Los Alamos County (4.3%), and Utah Associated Municipal Power System (4.2%). Only the City of Farmington, which owns 5% of San Juan, has indicated any interest in the retrofit proposal, mainly as a way to save coal plant jobs. None of the other current user/owners of the plant’s electricity is motivated to support the carbon-capture plan, which has been shown to be economically unviable and which lies outside the changing advanced resource planning of all of the utilities.

Further, no investors in the San Juan carbon-capture retrofit have stepped forward. (19, 20)

Clearly, without financing, without transmission access, without a business model that works—and without customers for its electricity—a carbon-capture retrofit of San Juan Generating Station is highly unlikely to proceed. PNM’s investments over the next year and a half in utility-scale solar only make the proposed retrofit more unlikely than ever to proceed and greatly increase the chances that SJGS will be decommissioned as scheduled.