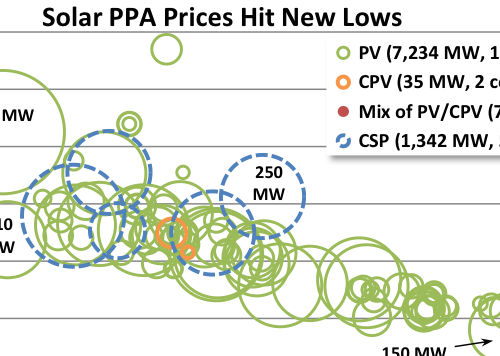 Installed utility-scale solar project costs have fallen by about 50%, from $6.3 per AC-W to $3.1 per AC-W, since 2009 for solar projects completed in 2014, Lawrence Berkeley National Laboratory (Berkeley Lab) said on Sept. 30.

According to Berkeley Lab’s recent report, Utility-Scale Solar 2014, some solar projects built in 2014 were priced as low as $2 per AC-W.

The report determined that solar project owners are regularly securing power purchases agreements (PPAs) at prices of 5 cents per kWh or less, and declines in PPA prices are making utility-scale projects competitive in states with very little solar development.

According to the report, there were nearly 45,000 MW of solar capacity in regional transmission operators’ interconnection queues across the U.S. at the end of 2014. In addition, of those projects in queue that receive regulatory approval, most would likely reach commercial operation prior to 2017, when the 30 percent federal investment tax credit is set to decline to 10 percent.