The company originally was started in 2008 with the idea to develop new thin-film solar panel technology, but eventually decided to abandon its upstream thin-film efforts and look to game-change further downstream. “Just being an upstream panel manufacturer is not really a great story; you need a good systems story,” said Jesse Atkinson, VP of business development and marketing. That means “not trying to make the lowest-cost panels, but making solar electricity cheap.” So the company started thinking from scratch about reducing costs further downstream and came to a realization: the same fundamental designs and processes for rooftop solar installations — individual and customizable, many processes and pieces, and lots of manual work — have been basically adopted for ground-mount solar installations without much thought. “It’s not truly repeatable or automatable — exactly how you don’t want to do large-scale installations of anything,” Atkinson explained.

Look at any established manufacturing industry and you’ll see how simplified, continuous process at high volume are more robust, faster, and lower cost than more heavily manual processes. Alion looked to the construction industry for its inspiration and found concrete extrusion: a long, continuous, simple, low-cost and efficient process that’s used for sidewalks and gutters. That’s the basis for the company’s new offering: robotic solar panel installation, minus the frames and component hardware, using concrete rails as both a guide and the actual mounting infrastructure.

Here’s how it works: the “Rover” machine preloaded with panels moves down the concrete railing system, affixing mounting legs to the concrete with a high-strength epoxy. Then the panels with preattached stiffening bars are then set into place. There’s no metal frame, clips, bolts or nuts, or glass to be hauled around, and the concrete railing eliminates the need to dig a cable trench. One small team and a single operator can extrude the concrete, load panels into the Rover, and maneuver it. The net result is a 75 percent reduction in labor and significant reduction of materials; concrete is cheap and can be locally sourced instead of shipping frames and components. And quality improves too, Atkinson notes, because robots don’t lose focus doing repetitive processes during long hours in the desert under tough conditions. Speaking to material reliability, concrete doesn’t corrode like metal in many environments, the epoxies are proven for decades in bridge anchor bolts, and the silicon adhesive for the stiffening bars is already used in building-integrated PV. 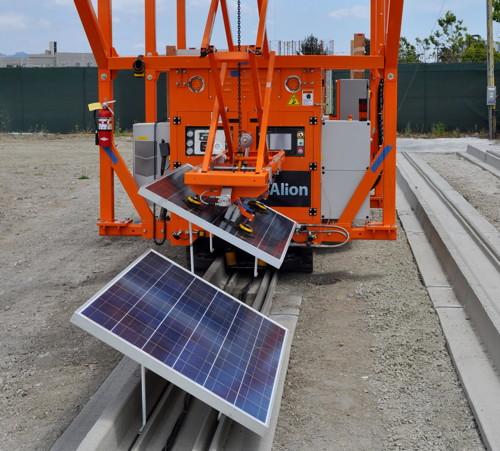 Rover works with all solar PV panels, but this type of new rail infrastructure is optimized for large-formfactor panels (60- or 72-cell crystalline silicon or thin-film) and frameless designs; other styles may result in “a minor economic impact,” Atkinson noted. The low-profile rail system means hurricane-strength wind loading, and being ballasted without ground penetration means it’s good for brownfields or areas with rocky or uneven soil. (On the other hand, it’s not so good in floodplains or areas that have snow.) Generation Two of Rover is already in the works, which Atkinson said will have wide-ranging upgrades that will require less concrete, improve some of the components (e.g. coated steel bars in the back of the panels), and collectively will “at least double” the machine’s speed.

Once the plant is up and running, another machine dubbed “Spot” takes over for automated cleaning of the panels. During the daytime Spot lives down at the end of the concrete rail system, soaking up juice with its own solar panel and battery; at night it makes the rounds with its dry brush and wet squeegee. Water drips directly in front of the squeegee, keeping water use to a minimum, saving up to 90 percent reduced vs. “guys with trucks and sprayers, walking around with a hose,” Atkinson said. An optional hedge-trimmer can be bolted to the front of the machine to keep vegetation at bay. Spot rides the rails just like Rover so none of its weight is on the panels, removing a potential damage risk. It can be programmed and controlled remotely, even with a smartphone. 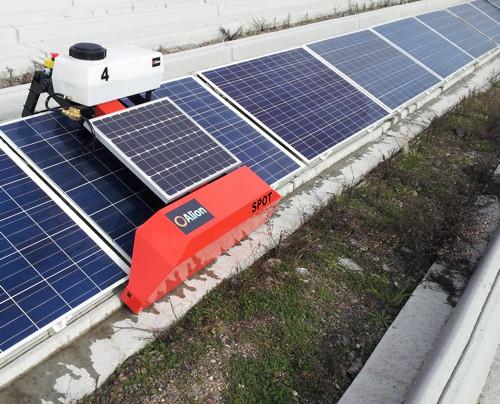 Here’s the bottom line for savings and costs, according to the company: the combination of faster and less-expensive installation and increased energy generation can reduce the levelized cost of energy (LCOE) by over $0.02/kwh for a large-scale project in California. On the labor side of the equation, a team of 10 workers with the next-gen Rover can put down 1 MW in a day. A 50-MW (ac) project in California with half a dozen Rovers, for example, could finish in about 12 weeks.

Alion has a 50-kW demonstration site in Richmond, CA (Bay Area), operating a couple of different rail installations and panel types for a year and a half — some of it sitting out there installed and operating, some of it used to continuously lay down new rails and designs, according to Atkinson. First pilot projects, sized around 1-2 MW, are being developed in the US, Saudi Arabia and China and should begin construction this year. The King Abdullah University of Science and Technology (KAUST) in Saudi Arabia will include Spot as part of its research and testing of soiling on solar panels; in that region especially cleaning solar panels is a must, Atkinson noted, or else risk potential 8-10 percent power loss per month due to soiling issues. Larger-scale solar projects (5-10 MW and up to 50 MW or bigger) see the most benefit from Rover and Spot, Atkinson said: “The bigger we go, the lower the cost is.”

Rather than just building and selling the tools for EPC customers, Alion wants to be brought in as the installation experts, shipping around its own teams and Rovers wherever needed. “Our core competency is better installation of utility-scale solar plants,” Atkinson said, “being both the guys who design and build the robots, and the guys who use them every day in the field.” He noted they want to partner with more integrated companies, especially big independent power producers (for example, NRG, Sempra, or NextEra) which not only install but also ultimately are a project’s long-term owners, so they can fully enjoy the time- and cost-benefits of both Rover and Spot.

But those EPC firms are also potential strategic partners. Alion is actively in discussions to include strategic investors, not just VC or equity supporters, in its current Series C round of funding from which it hopes to raise at least another $25 million, after two initial rounds of funding totaling around $50 million. Atkinson projected this will be the last funding the company expects to need, “more than enough to get our first projects going and invest in R&D.”

To those who might decry that significant improvement in solar energy technology and economics means sacrificing lots of jobs, Atkinson answers that it’s inevitable for the industry to keep streamlining and scaling up. Automation has already been adopted in other EPC areas from grounding posts to racking to cleaning, and Alion is simply “taking a new, more complete approach to it than others.” And the jobs that are eliminated by Alion’s automation are “the guys out in the desert, digging ditches and bolting bolts” — replaced with fewer but more skilled technical operators, he points out. “If we can create a lot more of those jobs, that’s better for the industry.”