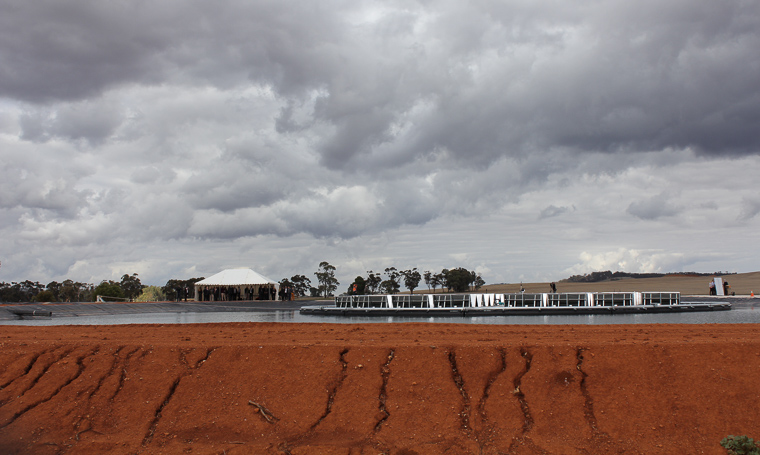 A large-scale floating solar panel array road tested in the South Australian Outback is set to soak up the Californian sunshine.

The City of Holtville has signed an agreement with Aussie company Infratech to manufacture the 1 MW floating solar system including 3576 panels, 276 rafts and 12 treatment pumps.

It will float on the surface and power a new water treatment plant to be used for the town’s drinking water supply and irrigation.

The system will also significantly reduce evaporation and decrease the reliance on chemicals, such as chlorine, to treat the water.

The photosynthesis process that creates blue-green algae will be limited by the shade provided by the panels, which will also keep the water cool and further raise its quality.

Holtville, situated about 120 miles east of San Diego, is known as the “Winter Salad Bowl” of the United States and the “Carrot Capital of the World.” Its agricultural heartland is relied on to produce more than 80 crops.

Holtville Council Member David Bradshaw, who also serves as the assistant water manager for community-owned utility Imperial Irrigation District, said the deployment would allow Holtville to save valuable agricultural space for farming while reducing its reliance on fossil fuels.

“Our decision to use Infratech’s floating solar system means we are not losing valuable farmland to massive solar farms; we can use three existing ponds and save our soil for increasing our capacity to produce crops,” he said. “We’re in the desert, and we lose more than five feet of water a year to evaporation while typically only receiving around three inches of rain annually.”

He added that Holtville’s main source of water, the Colorado River via the Hoover Dam, is currently in drought.

“Our residents use the water for drinking and irrigation, so this installation means the quality and taste of that water will improve while also ensuring we are on our way to meeting California’s renewable energy target of 50 per cent by 2030,” he said.

Holtville is near the infamous San Andreas Fault so any energy infrastructure has to be able to withstand earthquakes and tremors.

The floating system can shift on the surface in the instance of tremors and is purpose-built to withstand waves. The system is expected to be fully installed and operational by mid-2016.

Infratech this year opened its first floating solar system at Jamestown in the mid-North of South Australia.

The Jamestown floating solar array is putting renewable energy back into the local grid and powering the council’s water treatment facility. It is the first of its kind in Australia.

The Infratech system claims to generate more than 50 percent more energy than rooftop solar systems to deliver consumers a savings of up to 15 percent on regular electricity prices.

“Jamestown and Holtville are proof points of what is possible when people look to sustainable infrastructure initiatives to power their communities,” Nellore said. “These projects also prove that Australian manufacturing has world-class expertise ready to be tapped for renewable energy, clean technology and other initiatives.”

Infratech will continue to work with the Centre for NanoScale Science and Technology at Flinders University in South Australia to deliver the next generation system to Holtville next year.

Flinders University Centre for NanoScale Science and Technology Director Professor David Lewis said the collaboration with the Sydney-based company commenced via the NanoConnect program with funding from the South Australian Department of State Development.

NanoConnect is a collaborative research program that helps companies understand how new technology and materials can positively impact their business and products.

“This is an exciting working project which highlights the role of nanotechnology in old and emerging industries – and of the benefits of collaborations between these industries and the university sector,” Lewis said. “It’s a demonstration of how knowledge in universities can be used to help companies create commercial outcomes and compete on the world stage.”

This article was published under a Creative Commons agreement by The Lead South Australia.