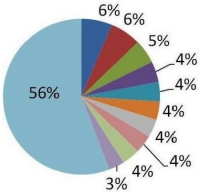 New Hampshire, U.S.A. — Europe may be the big end-market for solar PV demand (at least for now), but from a manufacturing standpoint Asian firms are beginning to dominate.

The top 10 solar cell manufacturers in 3Q11, collectively representing 44% of global production, had a decidedly Asian flavor, according to data compiled by Lux Research. First Solar led the pack, but just barely — right behind it were the Chinese solar trinity of Suntech, Yingli, and Trina (who led the pack in 2Q11, according to IMS Research). Other Asia-based suppliers on the list include Taiwan firms Motech and Neo Solar, and despite its name Canadian Solar has most of its operations and production in China and thus its costs and pricing are typical of regional peers. 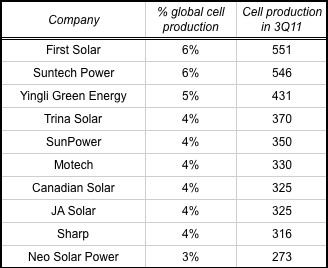 Both polysilicon production (notably REC) and module production are clearly shifting their gaze toward Asia — and look for Asian manufacturers to keep rising on the list, eventually surpassing 50% even in the face of trade disputes and possible tariffs, notes Lux Research analyst Fatima Toor.

And here’s something else to think about: What does it mean to be among the leaders in solar cell production, when the market is still in severe oversupply? Until end-demand catches up and closes the yawning gap (which could be as much as 20GW), suppliers especially on the upstream end will continue to feel the pressure of a strained market. Manufacturers are selling modules at record- and unsustainably-low ~$1/W to burn inventories, creating a “cut-throat” competitive market, notes Lux.