New Hampshire, U.S.A. — First Solar and a host of Chinese firms continued to dominate solar module manufacturing in 2011, jockeying over the same positions for more than a year now, according to data from Lux Research. 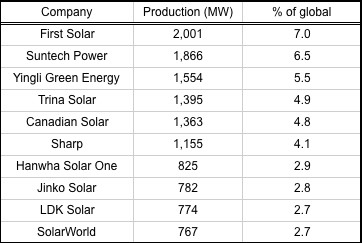 Moving up the list and worth noting, says Lux analyst Fatima Toor, are Japan’s Sharp and South Korea’s Hanwha, where interest in renewable energy has accelerated because of both the Fukushima nuclear disaster one year ago and increased competition from regional rival China. “Expect to see a major rise in market share from Japanese and Korean suppliers, while European module manufacturers struggle with financial woes and reduced government incentives for solar in Europe,” she says in a statement.

Another interesting exercise is comparing these numbers for solar module manufacturing output with numbers showing companies’ module manufacturing capacity (via Solarplaza). The differences illustrate who has factory capabilities that they’re not using, and in some cases it’s striking. LDK and Sharp, for example, would each seem to have more than 1.5GW of idled factory capacity. 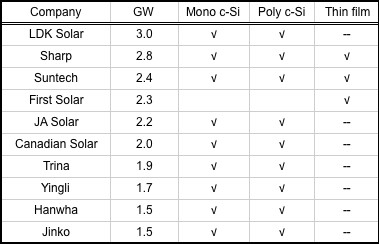