More
Home Solar Are You Realizing the Full Value of Your Solar Initiatives? 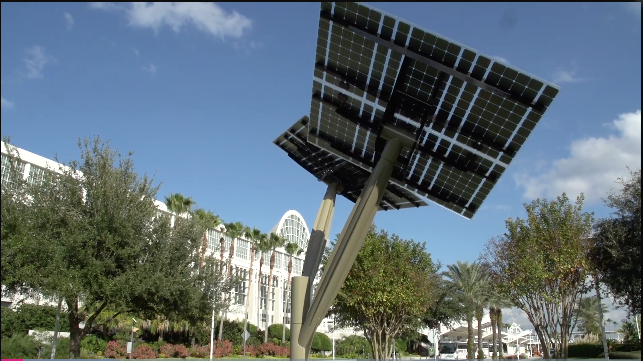 Well not so fast. How does the company show the general public that the corporation has committed to solar power, build a reputation for environmental stewardship, and influence people to follow their lead? Unless its customers are green energy champions themselves, it’s fairly likely that the general public has no idea that, for example IKEA has solar power on 90 percent of its stores or that Target surpassed Walmart in 2015 for the amount of solar energy it uses or that the Orange County Convention Center (OCCC) has a 1-MW solar array on its roof? Consumers don’t know because they can’t see it.

A North Carolina-based company hopes to fix the visibility problem that sustainability-focused corporations like IKEA, Target and the OCCC experience. Spotlight Solar manufactures aesthetically pleasing architectural solar structures that organizations can put outside of their headquarters or publicly accessible areas to drive attention to the fact that they are committed to solar. The structures, which some call “solar trees,” come in a variety of colors and shapes.

“The point is to draw attention to solar and the property’s clean energy stewardship, which normally has no visible presence,” said Craig Merrigan, CEO and Co-founder of the company.

In December 2016, Renewable Energy World visited four Spotlight Solar trees at the OCCC and heard from sustainability program manager John Culver about both the rooftop array and the solar trees outside of the convention center.

“We get a large economic return on the energy generated by our [rooftop] solar array but also the economic return of individuals and conventions coming to Orlando specifically because of our renewable energy investment,” he said.

“That is a value that we can’t put a number on,” he added.

Sam Choi, Renewable Energy Program manager with the Orlando Utilities Commission (OUC) agrees that the trees are an excellent way to showcase the utility’s sustainability commitment. OUC financed the solar array on the roof of the OCCC and sells the power back to the convention center through a PPA.

“These [solar trees] are high visibility projects that show and demonstrate to customers that we are very friendly toward solar and sustainability,” said Choi.

Both highly noticeable and interactive, solar trees in public spaces give pedestrians and others a shady spot in which to sit by and charge a phone or laptop or even charge up an electric car. One solar tree can provide enough power to run an electric vehicle for 15,000 miles. On the solar trees at the convention center, OUC has signs with a QR code that customers can scan to learn more about the utility’s solar initiatives.

As solar continues to grow, the mission of Spotlight Solar, a certified B Corporation, is two-fold. First, it wants to help corporations and utilities that are committed to solar visibly show their stewardship, adding reputation value to the return on solar. Second, it is helping educate the general public about solar. For a new technology to enter the mainstream of the market, said Merrigan, it has to be seen in order for people to learn what it is, develop a trust for it and eventually adopt it for themselves.

“We’re trying to have that positive impact” he said.