More
Home Solar Are Solar Panels the Next Granite Countertop for Homebuilders? 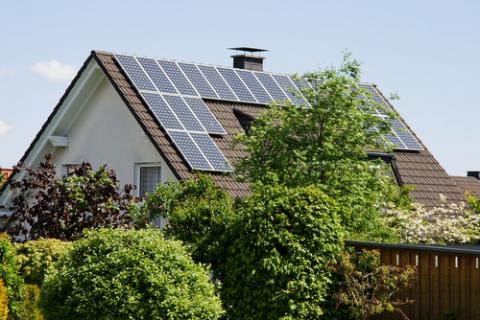 NEW YORK CITY — Solar panels are the next granite countertops: an amenity for new homes that’s becoming a standard option for buyers in U.S. markets.

At least six of 10 largest U.S. homebuilders led by KB Home include the photovoltaic devices in new construction, according to supplier SunPower Corp. Two California towns are mandating installations, and demand for the systems that generate electricity at home will jump 56 percent nationwide this year, according to the Solar Energy Industries Association.

“In the next six months, homebuilders in California and the expensive-energy states will be going solar as a standard, and just incorporating it into the cost of the house like any other feature,” Jim Petersen, chief executive officer of the PetersenDean Inc., the largest closely held U.S. roofing and solar contractor, said in an interview.

Lashing panels to roofs during construction is about 20 percent cheaper than after a house is built. Homeowners who can afford the extra $10,000 to $20,000 cost in return for free power threaten the business of traditional utilities such as Edison International of California or Kansas’ Westar Energy Inc.

Power companies are losing business because they can’t cut their rates in line with the tumbling prices of residential solar systems. Those cost about $4.93 a watt in the first quarter, down 16 percent from a year earlier, according to the Washington-based solar association. That was sparked by the 18 percent slump in prices for solar panels and related hardware in the same period.

A 3-kilowatt system, enough to power a typical mid-size home, costs less than $15,000 and can be rolled into a mortgage, said Tom Werner, CEO of San Jose, California-based SunPower.

“You embed it into your home mortgage, you’re cashflow positive month one,” he said.

That’s similar to how some buyers decided to pay $5,000 or $10,000 for a kitchen countertop that would be from natural materials and would outlast a Formica-style top.

“You’re going to see a transition from novelty, to granite countertops, to mainstream option,” Werner said in an interview. “We’re rapidly passing the equivalent of a ‘countertops decision’ to a ‘no-brainer.’ You just do it.”

As more homes generate their own power, typically with the help of state or federal subsidies, they’re buying less electricity from traditional utilities.

PG&E Corp., California’s biggest, has said this jeopardizes the power grid because there’s less revenue to maintain the infrastructure. In response, utilities are raising rates, a burden that’s a slightly heavier burden for people without solar power. In California they may eventually pass on as much as $1.3 billion in annual costs to customers who don’t have panels.

The price crunch has also clobbered many manufacturers, pushing some of the biggest in Germany and China to protect themselves from creditors and restructure debt over the past two years, including Solar Millennium AG and Q-Cells SE.

PetersenDean installed photovoltaic systems on about 7.5 percent of the 100,000 roofs it built last year. CEO Petersen said he expects that figure to double this year.

“We’ve picked up at least a dozen new subdivisions since mid-March, and all of them have incorporated it into the cost of construction,” he said.

KB Home has built about 1,800 homes with rooftop solar since 2011, according to Steve Ruffner, president of the company’s Southern California unit. It’s currently developing 22 communities in the most populous state that include panels as a standard feature, he said.

“Our buyers told us that’s the way they wanted to go,” Ruffner said in an interview. “Selling solar to the consumer is the value in the process, because they can put that in their mortgage.” The company delivered almost 3,300 homes in total during in the six months through May and expects to surpass that in the second half of its fiscal year.

KB sells solar as an option on homes in Nevada, Texas and Colorado and plans to offer it in Arizona beginning next month.

“It’s not as big of a deal elsewhere,” she said. Builders in other states haven’t seen significant demand for energy- efficient homes, so “it’s not really an important part of your strategy.”

About 494 megawatts of panels were installed atop new and existing U.S. homes in 2012, according to the solar trade group. That figure is expected to swell to 770 megawatts this year as prices continue to slide and may reach 2,175 megawatts in 2016.

SunPower has supplied components for more than 10,000 U.S. homes, including 4,000 built last year in California, the biggest solar state. As many as one in five homes built in the state this year will have solar, Werner said.

The panel maker also has provided systems to builders including DR Horton Inc., PulteGroup Inc., Standard Pacific Homes and Richmond American Homes, all of which declined to make executives available to discuss their strategies.

R. Rex Parris, the mayor of Lancaster, California, pushed through legislation in March requiring the equivalent of at least 1 kilowatt of solar power on all new homes starting next year. About 97 percent of city buildings are considered “net zero,” producing as much power as they consume, he said.

The entire city, about 50 miles (80 kilometers) north of Los Angeles, may be net-zero within three years, he said. Sebastopol, California, a town about 55 miles north of San Francisco, passed a similar measure in May that applies to new residential and commercial buildings.

“Economically, there’s absolutely no reason not to do this,” Parris said. “Solar’s the only way to go.”