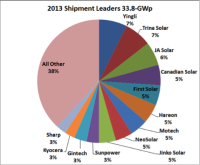 The good news: PV industry shipments of in-house manufacturer production grew by 30 percent in 2013 over 2012 to 33.8-GWp and manufacturer inventory decreased.

Basically: Inventory in + annual production – inventory out = shipments from in house production.  An extremely generous way to look at this equation and one that calls for the assumption that manufacturing capacity is 100 percent utilized is: inventory in + annual capacity – inventory out = shipments from in-house production.  This last calls for an acceptance that the machinery was on line 100 percent of the time.

As is the tradition, announcements for 2013 manufacturer shipments are running high – though, when compared with available capacity, not any higher than usual.  Nonetheless, the annual number enhancement does not serve to encourage governments to continue incentive programs (such as the U.S. ITC or the FiTs in Germany and Japan) and do not support statements that the industry will cease to operate without incentives.  Simply put, if you make yourself look rich it is difficult to go back a plead poverty, though, some billionaires in the US manage this quite well.

Solar statistics differ based on what the counter is counting — there is demand side inventory (what installers have left over and bring into the new year), manufacturer inventory, manufacturing capacity to produce cells and thin film panels, in-house production, shipments of in-house manufactured technology, installations, defective modules (removed from the field during a calendar year) and inventory that moves into the following year.  During 2013, PV manufacturers worked down considerable inventory and ended the year with approximately half of what they started with at 729.5-MWp.  Demand side inventory decreased by 979.8-MWp in 2013 ending at 2.7-GWp.  Manufacturing capacity (c-Si cells and thin film panels) was 41.4-GWp and shipments were 33.8-GWp.  In 2013, production was lower than shipments due to inventory overhang from the previous year.  At 34.8-GWp, installations in 2013 were higher than shipments because of inventory overhang on both the both demand and supply sides. 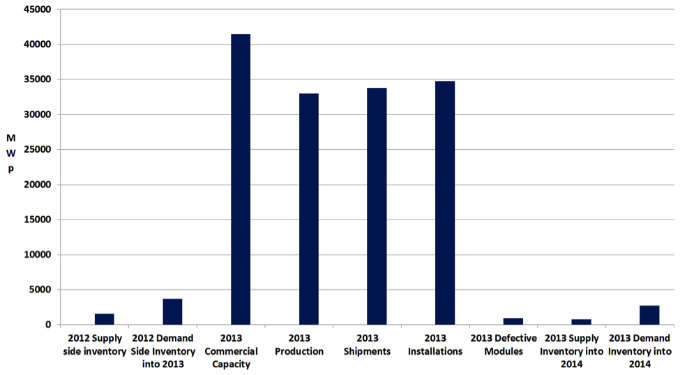 Unsurprisingly, given the recent tariff disputes on imports from China into the EU and the US, shipments from Taiwan showed a healthy 43 percent increase in 2013 over 2012 to 7-GWp.  Shipments from the ROW (the Philippines, South Korea, Singapore, India, Malaysia) exhibited even stronger growth at 74 percent in 2013 over the previous year to 6.6-GWp.  Shipments from China showed an 18 percent increase over the previous year to 15.1-GWp (a 45 percent share of global shipments), unless you count the outsourced product, (which primarily came from Taiwan and the ROW).  Counting the outsourced product would increase the total shipment number (double and triple counting) as well as China’s share significantly.  Figure 2 offers a breakdown of regional shipment shares of in house manufactured c-Si cells (whether or not they are assembled into modules) and thin film panels. 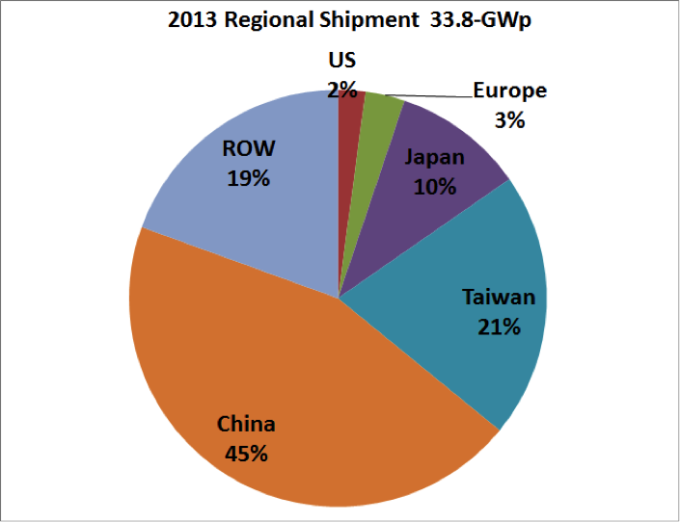 For Technology Shipments, More of the Same

Who’s on First, Second, Third, and Does It Really Matter?

Figure 4 presents the shipment leaders (of in-house manufactured cells and thin film panels).  There are manufacturers who reported shipments for 2013 who are absent from the list — this is because these manufacturers have wafer capacity, and module assembly capacity, but no cell processing capability and therefore send their cells out to be processed.  Cells for this analysis are counted at the point of processing to avoid (where possible) double counting of product.  Every attempt has been made to separate outsourced product from the manufacturer’s in-house production.  Wherever possible, inventory or estimates of inventory have been assessed to arrive at an accurate count.  Finally, magical thinking aside, since no perfect worlds exist, an attempt has been made to right-size over reporting.

And Finally, A Word from the Future

Given an expected increase in capacity to 46-GWp, manufacturer inventory of 729.5-MWp, and demand side inventory of 2.7-GWp, the PV industry could achieve installations of 49-GWp in 2014 (give or take a megawatt), but this is highly doubtful.  China and Japan continue to perform well and as changes in the ITC approach activity in the US is expected to be robust.  The market in Europe continues to shrink (from a high close to 87 percent of global demand at one point to ~21 percent in 2013 and a far lower showing in 2014).  Emerging markets have few incentives and, as these markets require a significant investment by manufacturers and developers to participate, will need rapid and creative business model innovation in order to continue growing and be profitable — in solar, growth and profitability are often mutually exclusive.

Extensive caveats aside, the PV industry may well be exiting teenager mode and entering young adulthood.  As all parents know, this does not mean a smooth ride from here on out, it means a whole new set of lessons on the way to maturity.