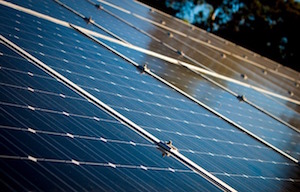 That’s because the Petaluma, California-based company makes components in the U.S. called microinverters that convert energy produced by photovoltaic panels from direct to alternating current. The problem is Enphase ships these mobile-phone sized devices to manufacturers in Asia to attach to panels before they’re sold in the U.S. That makes them subject to duties, and that’s why Enphase hired a lobbyist this month.

Enphase joins SunPower Corp., the second-largest U.S. panel maker, in pleading for an exception to the 30 percent tariff. First Solar Inc., the largest U.S. panel-manufacturer, is already exempt because it’s thin-film technology differs from the material used by most companies in Asia.

Enphase soared as much as 24 percent Wednesday to $3.45 after the company reported its first quarterly profit on an adjusted basis since 2015.