New Hampshire, USA — The global solar industry is in the midst of another “inflection point” that sets the stage for “the beginning of the grid parity era,” where solar is at equal cost or cheaper than traditional energy sources, according to a new report from Deutsche Bank. The report says that the number of markets where solar is at grid parity will double over the next 3-5 years.

Looking out over the next year and a half, Deutsche Bank analyst Vishal Shah sees the solar sector entering a “third growth phase” led by distributed solar as leasing models become more mainstream and new policies in international markets. “We expect this to change and expect sustainable policies to drive grid parity growth over the next 5-10 years,” he writes.

For the moment, solar energy demand is being driven by “sustainable” markets, with Japan leading the pack at an estimated 7 GW annual demand. China, which plans to add 10 GW of solar capacity this year alone, only added “in the 2-3 GW range” during 1H13, Shah says — which would suggest a vast expansion is coming in the second half of the year.

Here’s how Deutsche Bank sees the shift occurring over the 2012-2014 period, in solar demand from “sustainable” and “unsustainable” markets. Sustainable is defined as U.S., China, and rest of world, with “unsustainable” meaning many European regions. 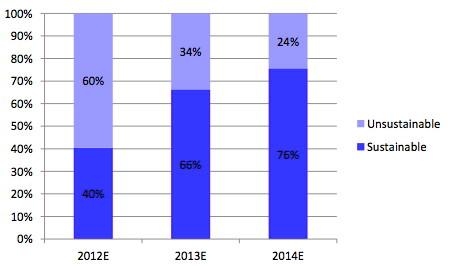 Emerging markets are likely to adopt unsubsidized policy models to promote solar growth, especially if new low-cost capital becomes available in concert with policy support to reduce costs, Shah asserts. “Solar is currently competitive without subsidies in 10+ major markets globally, and has the potential to achieve competitiveness in 10-20 additional markets over the next 3 years.” He points to parts of Southern Italy that are incorporating net-metering and self-consumption, and where multi-MW projects are being built in the South of Rome for €0.90/W and solar electricity costs approaching €80/MWh. Markets in India and Africa are also seeing solar as cheaper than diesel-based electricity generation, with solar project bids in India at 12 c/kWh vs. 20c/kWh for diesel, he points out.

Out of 25 countries analyzed, 11 are at or below grid parity for residential solar, according to Shah. Assumptions include a 5-kW DC residential rooftop system and traditional string inverter, 0.70 production decrease annually, 80 percent DC-AC efficiency conversion, and assumptions of component costs adding up to $1.93-$2.20/W, plus certain debt levels and O&M costs. Here’s an example of what the bank sees in some North American areas; similarly there are several areas in countries/regions in Asia, Europe, Africa, and the Middle East where solar is at LCOE grid-parity or better.