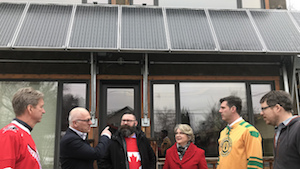 A bill was introduced last week in Alberta, Canada, that could give municipalities in the province the option to create Property Assessed Clean Energy (PACE) financing programs.

If the bill passes, the programs would allow homeowners to finance energy efficiency and renewable energy upgrades through their property taxes.

PACE programs have grown in popularity in the U.S. since 2008, and Ontario was the first Canadian province to put PACE financing in place in 2012. Nova Scotia and Quebec also have PACE legislation.

“We know that Albertans care about taking action on climate change, and PACE will make it more affordable for them to do just that,” Shaye Anderson, Minister of Municipal Affairs, said in a statement.

According to the Alberta government, upon passage of the bill, the government would consult with stakeholders to develop a regulation covering, for example:

The Alberta Climate Change Office and Energy Efficiency Alberta will work together this year to design a PACE program. The legislation would be effective early next year, and municipalities would then have to pass a PACE bylaw to make the program active.