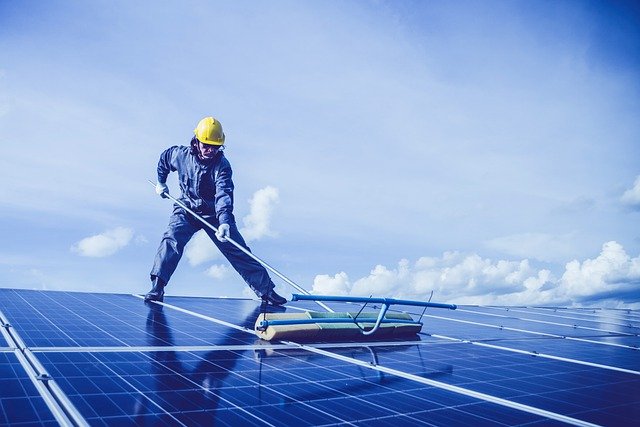 Solar advocates say Evergy’s proposed substitute is as discriminatory as one thrown out by the state’s high court.

Clean energy activists see the “grid access fee” now before the Kansas Corporation Commission as discrimination in a slightly different form. The regulators will begin a public hearing on the matter on Nov. 5.

“If you have distributed generation, you pay more” under the proposal, said Zack Pistora, who represents the Sierra Club in Kansas. “A grid access fee is going to be discrimination… plain and simple. I don’t think this passes the ruling made by the Kansas Supreme Court.”

Although state regulators earlier ruled that Evergy could treat solar customers as a class apart from other customers, the Supreme Court in April rejected a demand fee that the company was charging only its solar customers. It now wants permission to charge solar customers a grid access fee of $3 per kilowatt of solar capacity. A typical residential solar array could incur a monthly grid fee of about $20.

The fee would apply to about 840 customers with solar panels in a large swath of Kansas that was served by Westar Energy until 2018, when that company merged with Kansas City Power & Light to form Evergy.

If regulators reject the fee, Evergy has an alternative in mind: a minimum monthly fee of $35 for all 610,000 residential customers in the company’s central and southern Kansas regions.

The company said in its filing that it prefers to impose a fee only on solar customers because it contends they don’t pay their fair share for the cost of maintaining grid infrastructure.

The court’s ruling prohibits utilities from charging customers who own distributed generation a higher price for the same service provided to other customers. Evergy contends the service is not the same. Lutz wrote that the two groups have different consumption patterns, with solar customers moving power in two directions rather than one, and therefore, “a different rate design for residential DG customers is not discriminatory.”

The debate over the costs and benefits of solar panels to the grid pops up regularly when utilities pursue fees on solar customers. While solar customers typically consume less power and therefore pay less in variable energy fees, their promoters claim that solar panels benefit the grid because they reduce wear on the system and produce power for other customers during times of heavy use, like hot summer afternoons. Although solar production doesn’t typically overlap completely with peak demand, it does produce at times when demand is ramping up.

A study done by AECOM and made public in July sought to determine the savings resulting from rooftop solar installations. It concluded that residential PV customers save a little bit more than the utility, and that the reverse holds true for commercial and industrial customers.

Value-of-solar studies have been done in several states to get a handle on solar’s impact on the grid. It has often been demonstrated to be a net benefit.

Scott White, a research and project analyst with solar installer Cromwell Environmental in Lawrence, Kansas, said he was especially disturbed that the proposed grid access fee would apply to every solar array in Kansas, regardless of its installation date. Owners of systems installed before 2018 are exempt from the demand fee now in effect, he pointed out.

He estimated that customers who have expected payback in eight or 10 years may find that horizon stretched to 12 or 15 years if the grid access charge is approved.

The long-running solar-fee saga in Kansas “does create uncertainty for the customer. Every time the rules change or new rules are proposed, there are clients who have signed an agreement who back out. Uncertainty of the rules is always bad for business.”