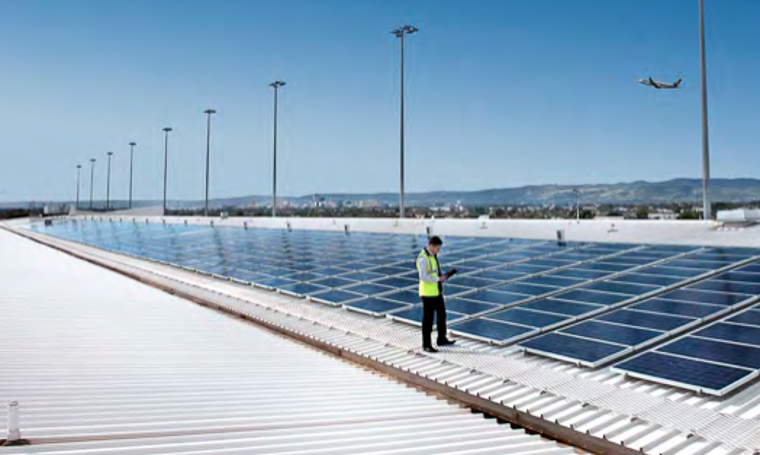 Adelaide Airport recently announced their plans to build a 1.17 MW solar system on the roof of their short-term car park, making it the largest private-sector solar system in South Australia.

The 8000-square-metre solar system – comprising of 4500 solar panels – will be built by Solgen Energy, and is expected to reduce the airport’s energy consumption and carbon emissions by up to 10 percent.

“Back then there was a lot more support for solar, we were finishing off a terminal development and took advantage of the support at the time, but this new system is just in a different league,” he said.

The new system has the capacity to power 300 domestic homes a year and will bring the airport’s total rooftop solar capacity to 1.28 MW.

With their eye on becoming one of the top tier business centres in the Asia Pacific region, Cox said investing in renewable energy was a key part of the airport’s motivation for the project.

“Our vision as a business is inherently tied up with being environmental leaders,” he said. “We’re the only airport in Australia to receive recognition to by the global Airport Carbon Accreditation program and it’s not going to stop here; we’re pretty proud of what we are going to achieve with this project.”

Furthermore, Adelaide Airport plans to undertake the $2.5 million upgrade without any government assistance.

“In some ways if we can make it work then other business should pay attention and say ‘well maybe we can make this work too’,” he said. “Certainly we have shareholders and our cost of energy is quite competitive, so to do this it had to stack up commercially.”

Solgen Energy director David Naismith said the project “demonstrates the growing uptake of solar power around Australia as an integral part of any business’s energy mix, irrespective of industry.”

“I think the uptake in solar is definitely increasing, and that’s driven by companies looking to save money,” he said. “The reality is the business case stands before the emission savings in many cases; businesses are under enough pressure but when they can see there is an operational save like energy, they are going to go for it.”

Despite the constraints of building on a site that is operational for almost 24 hours a day, Naismith said airports were “good candidates” for large-scale solar systems given the size of their roof surface and day light consumption.

“We’ve been in the commercial space for the last eight years, and it’s encouraging to see these large commercial operations happening; it makes a lot of sense environmentally and forms the cornerstone of their environmental objectives as well,” he said.

Work on the Adelaide Airport solar system is expected to start in December, and be completed by April 2016.