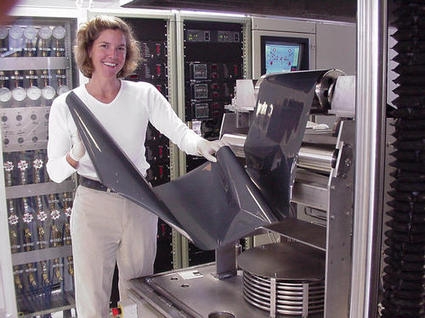 Long before 1971, before the first calculator or Speak ‘n Spell rolled off an assembly line, early chip-makers like Texas Instruments and Intel knew they would succeed because of scaling.

Scaling was inherent in Gordon Moore’s famous “Electronics” paper of 1965, the one which included the prediction which history records as “Moore’s Law.” The planar process could be reproduced, and steadily improved.

Today’s solar industry is slightly different from the chip business, because while we’re certain of demand for what comes out of the factory, we’re uncertain as to which process and which solar technology, will eventually win. But scaling now is protection for the future. Getting big now means you may be able to buy the new technology tomorrow, because with demand proven, it’s bound to be expensive.

But here’s where it gets tricky, and where our paths diverge. Chip companies in 1971 knew they had the right technology platform, that all they needed to do was scale. If a really big company can scale a completely different solar technology, even large solar companies like First Solar are still very vulnerable.

That’s why announcements like this one from GE deserve attention. GE said it bought the rest of PrimeStar Solar, in which it’s held a controlling stake since 2008, and that (more important) it can deliver CIGS technology at 13% efficiency (about 50% better than rivals) using cadmium telluride (CdTe), a crystalline lattice already used in things like infrared and radiation detectors

GE has already set plans to build a manufacturing plant capable of producing 400 Mwatts/year – about half of what NanoSolar says it’s aiming at.

All of which means we have a great technology race on our hands in thin film:

Oh, and note I just said thin film. I haven’t even mentioned polysilicon solar panels, which are even more efficient than the CdTe thin-film GE promises.

This much seems clear. All this competition is going to drive costs down, prices down, capital requirements up and production way up, and (based on history) probably faster than you can now imagine.