Despite the significant declines in installed PV system pricing over the past 12-18 months, most European markets are actually seeing declining investment returns due to the reductions in PV incentives now available.

However, consumer savings associated with avoiding retail electricity purchase (related to onsite consumption of PV production) can help economic returns on the initial investments, particularly within the residential segment.

Purchase avoidance benefits are typically regulated regionally, as part of net-metering allowances. For example, residential PV operators in the Flanders region of Belgium have recently incurred a retroactive (and negative economic) impact on their net-metering allowance, due to emerging barriers arising from utility companies being successful in lobbying to impose grid-access fees.

Addressing this type of barrier – and turning it into an opportunity that may drive PV adoption going forward – requires that PV operators accept ‘reasonable and fair’ grid-access fees. In addition, the European PV lobby may now need to act with an increasingly unified voice, in order to achieve fair treatment from a variety of parties each with vested interests. 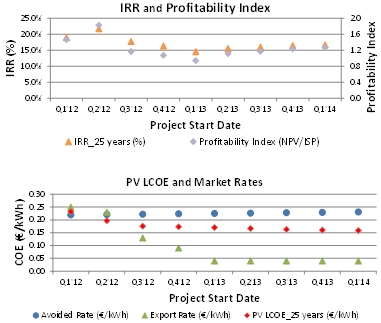 The figures show that successive incentive reductions during 2012 (and before) in Flanders have driven down the attractiveness indicators of both the Project IRR and the Profitability Index (PI). However, there is a positive impact: by avoiding retail purchase of increasingly expensive electricity. This can help make the case for PV, with a return to PI figures above 1 and a more viable IRR (albeit, half what it was in 2010). (This analysis assumes a conservative 2.5% per year increase of retail electricity rates.)

The PV LCOE analysis (shown in the figure) is most sensitive to the discount rate applied. In the analysis here, this is set at 6%. Sensitivity to the precise installed system price (ISP) is significant. However, in the more mature European markets, the regional variability of the ISPs has become less significant, as countries converge to more standard pricing levels across Europe.

The net impact of the new grid-access fee structure in Flanders provides (on average) a 15% reduction in PV-production-related benefits: a level that appears excessive, considering the actual impact of PV production injected on the grid. Moreover, the imposed average flat-rate of €53/kW-year (on inverter rating) impacts (in a disproportionate manner) on users that installed over-sized inverters to help mitigate local grid characteristics and on installations with performance losses due to less-than-optimal array orientation/shading.

Another new barrier still to be addressed relates to ‘saturated’ local grids. The saturation condition can result especially during midday as power moves ‘upstream’ to (and through) voltage transformer stations. This can incur wire and voltage transformer losses and must share other grid operation costs. Successive transformation incurs incremental losses and is only feasible if the transformers are prepared for bi-directional operation. An undesirable scenario is provided by at least two transformation stages: first staged-up into medium voltage, and later staged-down for low voltage consumption.

The pan-European commercial electricity market environment exhibits a range of demands that arise from a highly competitive sector comprising powerful parties coupled with historic levels of subsidy for traditional energy sources. Additional challenges arise also from regional politics, in particular at a time of fiscal deficit reduction across Europe.

However, hopes for a favorable unity in European PV lobbying efforts must address the challenges of operating within a complex environment of diverse cultures, vested interests, and market control. This is certainly a difficult proposition, and may require increased public-interest participation as a break from the norm.

This article was originally published on NPD Solarbuzz and was republished with permission.