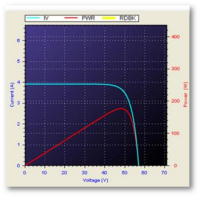 To deliver the maximum amount of power from solar panels or arrays, standalone inverters and grid-tie inverters use a sophisticated strategy to find the maximum power point, or MPP, for given conditions. They do this by varying the load on the solar panel or array until it finds the point on the panel’s or array’s I-V curve that will deliver the most power. The inverter then converts this DC power to AC power, which is then used locally or fed into the power grid.

Determining how well an inverter accomplishes this task is extremely important. The feasibility of a project may rely on an inverter being as efficient as the manufacturer or distributor says it is. A discrepancy of even a few percent could render a project uneconomical, and at worst, could lead to lawsuits.

To effectively test the efficiency of photovoltaic inverters, you need a solar array simulator that both accurately simulates the output of a solar panel or array and that can supply the output power required for a particular application. Using actual solar panels or arrays is just not practical because it is not feasible to control their output to the degree required to simulate all conditions.

Modern Simulators Are Up to the Challenge

To simulate a solar panel or array, inverter designers and manufacturers use modern, digitally-controlled power supplies. When coupled with sophisticated control software, these systems can simulate solar panel arrays up to 1 MW.

Accurately simulating a solar array to test inverters can be quite a challenge. As noted earlier, inverters continually change their output impedance, searching for that maximum power point. The simulator must respond to those load changes as a solar array would. Not only must the simulator maintain its power output, it must track the I-V curve of the solar panel or array it is simulating.

To complicate matters, many solar inverters generate AC ripple on their DC input, which is connected to the photovoltaic array. For single phase inverters, the frequency of this ripple is twice the line frequency (120 Hz for U.S. models). Normally, you would want a power supply to suppress this ripple, but a solar array simulator’s power supplies must not suppress it.

An increasing number of inverters (and virtually all micro-inverters) accurately measure amplitude and phase of the ripple voltage and current to quickly determine the MPP of the array. This approach allows inverters to determine the MPP at a much higher speed when compared to conventional dithering techniques (also called perturbate-and-observe). Faster tracking to the MPP results in a much higher overall efficiency in cloudy conditions, where the irradiance is constantly changing. It is likely that all solar inverters will soon use this approach since end users are very sensitive to the overall efficiency of their solar energy installations.

Finally, solar array simulators need to measure and log inverter’s AC output and correlate that data with the DC power input. This closes the test loop and allows you to determine how efficient your inverter design really is.

Staying on the Curve

In order to perform an accurate test, the output of a solar array simulator must faithfully  follow the I-V curve of a solar array or solar panel. That is to say that it must respond just as a solar array would to the changing load conditions imposed by the inverter under test. In order to evaluate how well a simulator can do this, you need to consider three parameters: output noise current, phase error between output voltage and current, and the MPP tracking accuracy.

Excessive output noise current will make it difficult, if not impossible for an inverter to find the maximum power point, and this will cause test problems.

The point of inoperability due to the level of noise is a function of the inverter itself.  The noise contributed by any PV simulator is made up primarily of its internal power switching noise and its associated harmonics.  Since both the inverter and the PV simulator have control loops, there could be interaction.  From the inverter design perspective, the inverter design engineer is trying to design a cost effective, high performance inverter.  Since an actual solar panel doesn’t produce any noise, the engineer is less likely to add filtering and the associated cost.  The level of noise is really key;  70ma versus 700ma is of course an order of magnitude and could be critical to some inverters and not so much to others.  However, we have been seeing a trend in which the inverter designs are reducing nice-to-have circuitry in favor of lower cost.  While this doesn’t make the inverter any less reliable, it may make performance testing a challenge with PV simulators that are not very refined.

In the real world, there is essentially zero phase  difference between the output voltage and output current of a solar panel or array, even when inverters use MPP tracking strategies that change the load very quickly. To accurately simulate a solar panel or array, therefore, it is important that the phase error of the simulator be less than 15 degrees even if the load is changing that quickly.  Many simulators are unable to do this, making them unsuitable for testing those inverters that use high sweep frequencies.

In an extreme case, when the phase error between the output voltage and output current approaches +/- 90 deg, the inverter under test will actually begin seeking the MPP in the wrong direction and will become unstable. With a significant phase error, even if the inverter is stable it will lock onto a curve location that is not the MPP. The amount of error is proportional to the phase error. We have observed this behavior on microinverters and residential inverters that use fast MPP tracking algorithms.

Another important specification is the maximum power point dynamic tracking accuracy. This is a measure of how much a simulator will deviate from a programmed I-V curve under dynamic conditions, where many factors can contribute to this inaccuracy.

Figure yy (above) shows a comparison of the dynamic MPP tracking accuracy of two simulators currently on the market. A test frequency of 16 Hz was used for this test to simulate the loading effect of an inverter. The red lines show the ideal response of the simulator, while the blue lines show the actual response. As you can see, there is quite a difference between the two simulators, and the difference is even higher as the dithering frequency increases.

In addition to the having superb electrical specifications, it’s important that a solar array simulator has software that is easy to use and capable of providing the desired test data. These features include:

The success and credibility of solar power depends in large part on the i performed, both at the development and production stages. To get the best results, you need the best test equipment that you can find. That means using a solar array simulator that accurately tracks the I-V curve even under the demanding conditions imposed by modern inverters. You can’t really settle for anything less.

How Do Photovoltaic Inverters Work?

Photovoltaic (PV) inverters work like any other type of inverter. That is to say they convert direct current to alternating current. PV inverters differ from standard inverters in that the DC input for a standard inverter is normally a steady DC supply, such as a battery, while the DC input for a PV inverter is a solar panel or array. The DC output of a solar panel varies widely as the temperature and amount of sunlight hitting the panel changes. 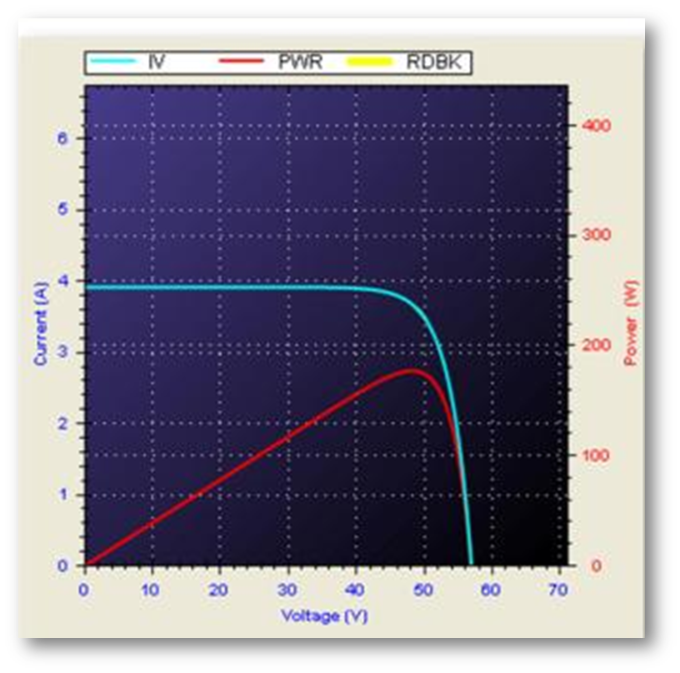 At some point along the curve, the power output (which is equal to the panel’s output voltage times the panel’s output current) of the panel is at maximum. This point is called the maximum power point. At this combination of voltage and current, the panel will be delivering the most power it can given the operating conditions. As you can see, the maximum power point is on the knee of the curve

Inverters use different strategies to find the maximum power point and to continue operating at that point under varying external conditions. Perhaps the most common strategy is called “perturb and observe.”

Inverters that use the “perturb and observe” strategy change their input impedance by a small amount so that the output voltage of the solar panel increases or decreases by a small amount. They then measure the output current and calculate the output power. If the power increases, the inverter makes further small adjustment in that direction until the output power no longer increases. When conditions change, the maximum power point changes, and the inverter once again goes through this process to find this point.

Because this is a very dynamic process, testing inverters is quite complicated. It’s impractical to use solar panels and PV arrays for this testing because their outputs are so dependent on illumination levels. Also, characteristics vary from panel to panel, making comparisons difficult.

The only way to get reliable results is to use a simulator that will faithfully replicate the output of a solar panel or array. To do this, the simulator must not only be able to supply a significant amount of output power, but agile enough to respond quickly to changes in the load impedance. Simulators that can do this will stay on the curve and provide the best test results. 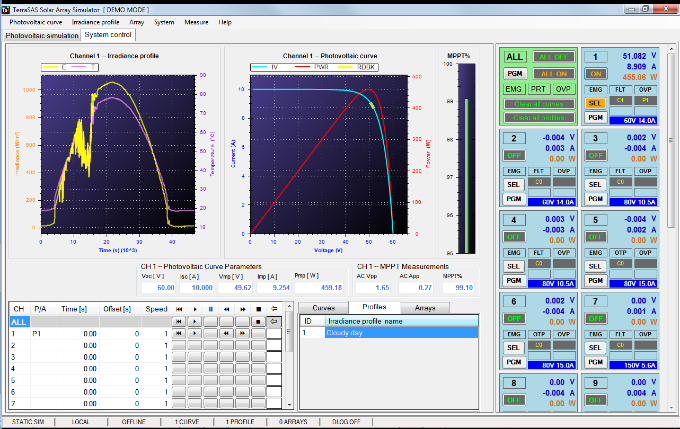