When it comes to solar energy, we ain’t seen NOTHIN’ yet. The boys and girls in the labs at Cal Tech and MIT and Cal Berkeley and places like that, being especially bright boys and girls, glanced up at the sun (when they were let out of the labs for Spring Break), and said to themselves “hello sunshine and hello fortune.”

They have hugely improved the miracle of taking a slab of plate glass and turning it into electricity, getting efficiencies approaching 50% now from panels that have a lifespan 25 years or more. They have also concocted panel compositions that are a little less efficient and noticeably less expensive and malleable panels for all kinds of special circumstances. But such miraculous stuff still costs a lot and only pays off for the average consumer after 5-to-10 years.

Engineering financial solutions that make such a proposition manageable has turned out to be a gift from the lab rats to their lesser and more materialistic compatriots in the business schools. But the wizards of sunshine are hardly done with their wonderworking.

Coming generations of solar materials will be spray on, wearable and storable. They will be a lot like the mysterious world of the digital, too nanotechnological to visualize, too psuedo-photosynthetic to really understand and too cheap and easy to not use.

Meanwhile, here in the now, a draft of a forthcoming study obtained by NewEnergyNews shows that energy policy planners are preparing for the U.S. to obtain 10%-to-20% of its electricity from the four prominent solar energy technologies by 2030. That’s up from today’s ~0.5%. The Solar Vision Study, a draft of a forthcoming report from the Solar Energy Technologies Program in the U.S. Department of Energy (DOE) Office of Energy Efficiency and Renewable Energy (EERE), is a detailed assessment of that projected two-decade growth. ::continue:: 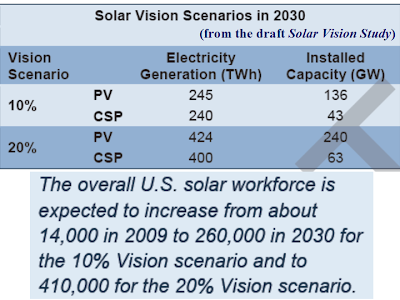 The DOE/EERE Solar Vision foresees two possible scenarios: In one, U.S. electricity demand keeps growing and solar expands to meet 10% of it by 2030. In the other, the U.S. takes advantage of the enormous Energy Efficiency opportunities it has to control the growth of its electricity demand so that the amount of solar energy installed capacity it is able to build in the next 20 years can meet 20% of total demand.

Though the study doesn’t specifically say so, this is vital to note: If it possible to achieve the 10% (and NewEnergyNews is convinced it is), it is certainly possible to achieve the 20% level because the Energy Efficiency advances needed in the 20% scenario are even more readily implementable than the solar advances. AND the benefits from the efficiency implementation will fund the cost of the bigger solar capability.

The two main solar technologies included in the study are (1) photovoltaic (PV) panels, and (2) concentrating solar power (CSP), both of which are used for electricity generation. PV is the familiar rooftop solar that converts sunlight into electricity. CSP is the solar power plant (SPP) technology that converts the sun’s heat into electricity. The other two solar technologies briefly considered in the report are solar heating and cooling (SHC), which capture the sun’s heat to avoid electricity and fossil fuel consumption.

The first and most important conclusion of the study, which does not make predictions but carefully examines potential and feasibility and delineates technical, policy and infrastructure measures needed to achieve the 10% and 20% implementations, is that these things can readily be done. No breakthrough technology is needed. Growth only need continue as it has in the past decade.

Yet if anything is true about the solar energy world, it is that technological breakthroughs minor and profound just keep coming. And solar industry growth, which boomed in the 2005-to-2008 economic expansion and was even impressive last year despite the recession, just keeps on.

So just imagine what solar energy and those lab rats are really going to do. 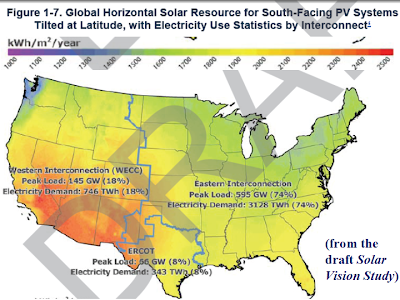 This post is based on Solar Vision Study (May 28, 2010, U.S. Department of Energy Office of Energy Efficiency and Renewable Energy)