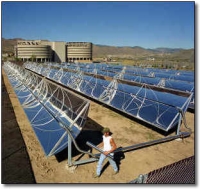 Washington D.C. [RenewableEnergyAccess.com] Concentrating Solar Power (CSP) plants are on their way to a major rebirth with the recent announcement of funding and support from the U.S. Department of Energy. The regional-five year agreement will couple the most commercially efficient solar technology with some of the country’s most significant solar energy resources, the states of New Mexico, Arizona, Nevada, California, Utah, Texas and Colorado.

“This exciting initiative will provide a substantial engine for economic development, job creation, air quality improvements and new, non-polluting sources of electricity supply for the region,” Acting Under Secretary of Energy David Garman said. Garman said the federal long-term goal is to lower the cost of CSP technology to 7 cents/kWh from the current cost of 12-14 cents/kWh. Through a five-year cooperative, cost-shared agreement first proposed by the Western Governor’s Association (WGA), DOE’s Office of Energy Efficiency and Renewable Energy will provide $90,000 for the first year along with the expertise and best technical information about CSP systems for the 5-year span of this agreement. DOE’s support will allow the participating states to achieve the WGA goal of new power purchase agreements for 1000 MW of CSP — enough energy to power 150,000 homes each year — in the southwestern states by 2010. The total estimated cost of the five-year project is $1,860,000, including DOE’s $90,000 contribution. WGA and the involved states will provide a cost share in the amount of $61,690 (41 percent of the total) in the first year. It is anticipated that WGA will provide additional cost share in years 2-5 of the project. During the first year of the project, activities will include establishment of a stakeholder group, development of the process by which stakeholders in the region can achieve the 1000 MW goal, and possibly the formation of a utility consortium. This agreement supports on-going State projects that include a 1 MW trough plant being built in Arizona, a 50 MW trough plant in Nevada that will be built in 2005, a task force in New Mexico to determine the most appropriate CSP technology for the state, and a task force that is developing a solar strategy to include a wide range of solar technologies for the State of California. The agreement grew out of a resolution passed by the WGA during their annual meeting in June 2004. The resolution calls for the development of 30 gigawatts (GW) of clean energy in the West by 2015; 1 GW of this is to be provided by concentrating solar power. This project is appropriate to the mission of the WGA to develop policy and implement programs in the areas of energy, natural resources, the environment, human services and economic development.