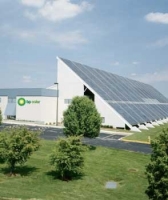 The holiday season is a time of giving, and this year food banks on both the east and the west coast have been given the gift of renewable energy through the donation of solar photovoltaic (PV) systems.

In Washington D.C., BP America has announced a $1 million donation of the company’s solar PV panels and other equipment to the Capital Area Food Bank (CAFB). Once installed, the system will be capable of generating more than 120 kW of electricity to the food bank.

The CAFB will save an estimated $71,000 per year on its energy bill, or about 20 percent of what it pays annually. As a result of the savings, the group will be able to provide those in need with more services and will be able to serve 200,000 extra meals each year.

“Solar technology is an important component in the overall energy mix in the United States, and the Capital Area Food Bank is an outstanding example of where today’s solar technology can be deployed,” said Bob Malone, chairman and president of BP America.

“The countless dollars that the food bank will save on energy expenditures will be used to feed the more than 380,000 people we serve through our network of agencies. Through their donation, BP is not only creating a cleaner environment, but their support will actually translate into food for thousands of folks here in the Metropolitan Washington, D.C. area,” said Lynn Brantley, President and CEO of the CAFB.

“By creating successful partnerships like this, our goal is to stimulate interest and confidence in the use of solar photovoltaic systems for a wide variety of applications,” said Hyun Park, senior vice president and general counsel for PG&E.

Money for the project also came from San Francisco’s Environment Department which donated $75,000 toward the solar panel installation. Mitsubishi Electric & Electronics USA, Inc. was selected to provide the 320 PV panels for the San Francisco Food Bank’s 55,000 sq.-ft. warehouse. All the panels will be installed by Sun Light & Power in conjunction with PG&E.

“We are delighted to be selected as the PV manufacturer for the Food Bank project,” said Gina Heng, Director of Sales and Marketing for Mitsubishi Electric & Electronics USA’s Photovoltaic Division. “With energy costs skyrocketing, non-profit organizations are really feeling the pinch.”

“We’re extremely grateful to PG&E and the City for their generous contribution to the greening of the Food Bank,” said Paul Ash, Executive Director of the San Francisco Food Bank. “This new solar system will help us conserve valuable resources, and with the savings in energy costs we will be able to supply tens of thousands of additional pounds of food to hungry San Franciscans.”