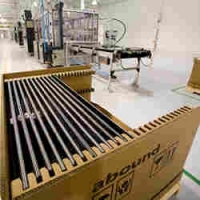 California, United States [RenewableEnergyWorld.com] Solar industry buffs likely spent the first weeks of April eagerly waiting earnings reports from the publically traded solar giants. But on April 14 the team over at Abound Solar had other priorities in mind. The Fort Collins, Colo.-based startup was celebrating the official opening of the company’s first full-scale production facility for its thin-film solar panels.

Tight credit markets and a slumping global economy might grip the rest of the world, but the solar industry is still innovating. Big companies are devoting millions of dollars in research and development to maintain if not grow their market shares, and engineers at nimble startups continue to turn their ideas into commercial products. New solar technologies, in other words, are still marching to the market.

The technology developed by Abound Solar, formerly called AVA Solar, is one of them. The two-year-old company, which raised US $104 million in equity financing late last year, aims to triple the annual capacity of its new plant to 200 megawatts (MW) by 2010, according to Russ Kanjorski, Abound’s vice president of marketing. The modules use a cadmium-telluride semiconductor, like those produced by Tempe, Ariz.-based First Solar, a world leader in thin-film solar panel manufacturing.

“For us, it is all about manufacturing and scalability,” said Kanjorski. This focus shouldn’t be surprising since Abound has its origins in the lab of Colorado State mechanical engineering professor W.S. Sampath. Over more than a decade, Sampath developed a continuous, automated manufacturing process for solar panels using glass coating with cadmium telluride. Based on that work, Abound’s manufacturing process can now turn a piece of glass into a solar module in less than two hours, a time Kanjorski believes is the fastest in the industry.

Abound’s modules convert 10 percent of sunlight into electric power, and within four years that number should rise to about 12 percent, Kanjorski said. Abound’s engineering team believes the plant, once at full capacity, will produce panels at less than $1 per watt.

First Solar, by comparison, is already below that target, having announced as part of its first quarter earnings an average manufacturing cost of US $0.93 per watt. Its panels have an efficiency of about 11 percent. The Abound team, however, is not discouraged. That’s because the company is not so much competing with First Solar as it is with silicon-based solar panels, Kanjorski said. As rapidly as thin-film technology is growing, conventional solar panels still account for more than 80 percent of the market.

Abound isn’t the only startup with high hopes for 2009. John Benner, who manages solar industry partnerships for the National Renewable Energy Laboratory’s National Center for Photovoltaics, said a number of other thin-film startups could start shipping products this year. Benner said one of them is Austin, Texas-based HelioVolt, which raised $101 million in venture funding in 2007 and uses a mixture of copper indium gallium and selenide as the semiconductor material for its panels. The startup has been working with researchers at the national lab to develop a new process for preparing these materials before they are reacted together to create the semiconductor. Benner said the new process will reduce costs and speed up manufacturing, though he declined to say by how much.

“There are a number of companies with factories that are at a stage where the equipment is in and they’re expecting to ship products this year,” Benner said. “Some won’t work as planned, but some probably will.”

Edward Yu, professor of electrical and computer engineering at the University of California, San Diego, believes thin-film technologies over the next few years will provide the largest reductions in costs across the industry. But he said the longevity of the panels could be a stumbling block—they’ll have to compete with conventional silicon-based panels which are typically guaranteed for 25 years. Yu also said the new thin-film producers will have to prove they can maintain the efficiency rates of their panels while ramping up production and keeping costs down.

While thin-film technologies attract a lot of attention, innovation is happening in the conventional silicon-based market, too. Benner, of the national lab, said that there are at least two dozen individual steps involved in turning a silicon wafer into a module. Improvements in any of them, from cleaning a piece of glass to changing electronic properties of silicon, could help drive down the average industry production costs of about $2 per watt.

Advent Solar’s team believes they’ve struck on a few improvements. The Albuquerque, N.M.-based company, which has raised about $118 million in venture funding, has developed a manufacturing process for high-efficiency cells. Its so-called emitter wrap through technology creates a back-contact cell that eliminates the grid lines found on the top of conventional cells. This design maximizes the amount of sunlight turned into electricity. Another technology, called the monolithic module assembly, borrows a page from the semiconductor industry, said Naresh Baliga, vice president of marketing. Like the semiconductor industry, Advent’s process uses robots in a planar production flow to drive up throughput and yield.

But it won’t be Advent who achieves that milestone. That’s because late last year the seven-year-old firm decided to take a new tack. With financing hard to find, company executives decided to abandon their plans for building solar panels and instead license their technology to existing manufacturers. Baliga said Advent is in talks with several “major players” in North America and Europe, and he expects products based on Advent’s technology to be available on the market by 2010.

Germany’s Q-Cells, the world’s largest cell manufacturer, is also working to improve silicon-based technology. One of the biggest changes is the company’s increasing shift toward using upgraded metallurgical silicon, said Joerg Mueller, head of the firm’s cell research and development technology department. Producing upgraded metallurgical silicon consumes less energy and has cost savings potential compare with conventional silicon in today’s market, he said. But it has meant that Q-Cells has had to adapt some of its production processes, such as the way it purifies the materials, to maintain high efficiencies.

Mueller said he believes the company will produce multi-crystalline cells with 18 percent efficiencies in two or three years. He said the company’s production cost target is to reach grid parity, and that his team is convinced that can be done with silicon-based technology in “the near future.” Q-Cells Chief Executive Anton Milner has said publically that PV system costs should reach grid parity in Italy by 2010 and in Germany by 2014, if current trends continue.

Besides the use of cheaper silicon, Mueller said the cell maker is working on other improvements. One is optimizing the front surface metallization of the cells to maintain high conductivity of the metal fingers while reducing shading. He also said the back surface of the cells could be improved to drive up efficiency.

So innovation is happening in the solar industry, and those changes should make their way to commercial products soon. The results should be more efficient systems and lower costs. Looking out even further, say five or 10 years from now, the University of California’s Yu said he expects very high-efficiency cells to reach the market. These include multi-junction cells, which stack layers of conducting material each tailored to absorb different parts of the electromagnetic spectrum and have already reached efficiency levels of 40 percent. But today they are expensive and only practical in space applications.

It will be challenging, Yu said, but by combining these cells with optical concentrators he thinks they could find a viable market for terrestrial power generation.

Justin Moresco has been writing about sustainability and green issues since 2005, first as a correspondent in West Africa for IRINnews. He now focuses mainly on emerging clean technology and is based in the San Francisco Bay Area. Before becoming a journalist, he was a licensed civil engineer.