Solar power still accounts for just under 1% of global electricity production, but it is growing at a tremendous pace and there’s no good reason for that to let up. In fact, there are 5 good reasons it will dominate energy in the next century.

Solar module prices have fallen about 100 times over in the past 30 years. In just the past 5 years or so, the average price has been cut in half. And the cuts will continue. There are still economies of scale to be achieved, and there’s still plenty of room for efficiency improvements. 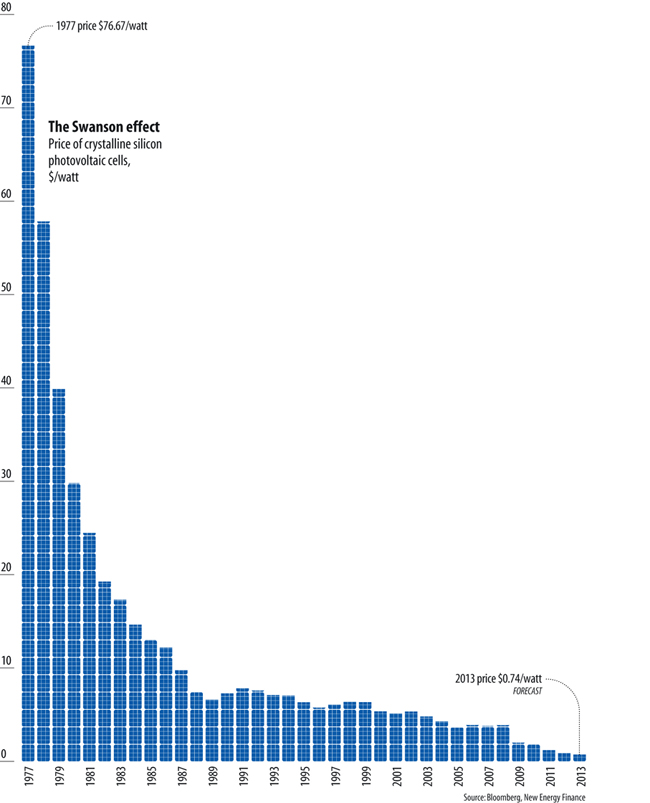 2) Soft costs are coming down too

The “hard costs” of the solar cells and solar modules are only part of the cost story. There are also many “soft costs” such as financing, customer acquisition, permitting, company overhead, etc. These often need quite mature markets to really fall. In many developed as well as developing countries, these costs have a lot of room to come down. On the financing side, solar is just now becoming a very “safe,” high-return investment in the eyes of many banks. On the customer acquisition side, advertising needs could fall dramatically as more people are exposed to solar and free “word of mouth” advertising grows. Solar permitting systems will be streamlined as going solar gets more and more popular and familiar to permitting organizations. Overhead costs per customer will come down as companies grow. And other soft costs will follow similar patterns.

Power plants have historically been giant, expensive, centralized projects. But solar is modular and can be as large or small as you want. One thing this means is that people can own and control their own “power plants,” which is definitely something that appeals to many people. Solar has a democratizing effect on the energy system, and releases people from payments to utility monopolies. The energy independences and self-reliance that solar power offers is very appealing to many people.

There’s no denying reality: the world is warming fast because of human-related emissions of greenhouse gases, and this is a great threat to the world as we know it if we don’t turn things around fast. Using more solar power is one of the best ways to do so, and it’s also one of the solutions that is fastest to implement.

5) The potential is insane

The amount of energy hitting the Earth every day in the form of light and heat from the sun is staggering. We know Texas has been a huge source of oil for many decades, but the amount of energy in the sunshine hitting Texas every month is greater than the energy in all of the oil ever pumped out of the state. That’s impressive.

Anyway, if you aren’t buying these five arguments, and you don’t want to take my word for it, maybe you’ll believe Shell (yes, the oil company). Shell has a projection showing solar power as the largest source of energy by 2070. Not just electricity, but all energy. If Shell admits it, I think it’s time for everyone to realize that solar power is the future. (By the way, compared to projections from other companies and organizations, Shell’s solar forecast is a bit pessimistic.)