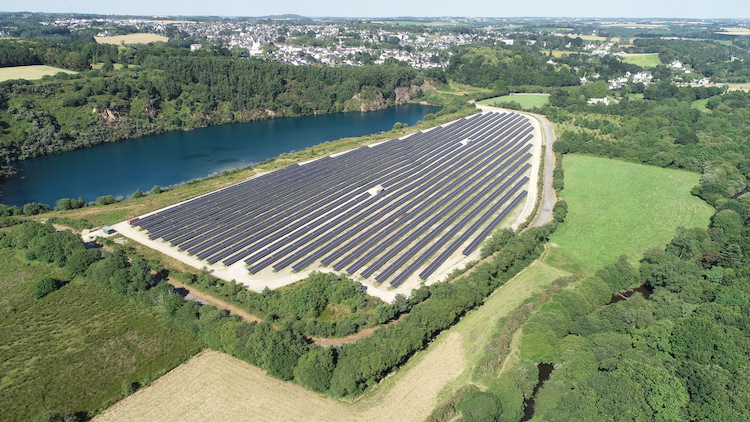 Situated in the commune of Baud in France’s Brittany region, the 4.5-MW solar plant was officially inaugurated and connected to the central grid on July 8. Comprising 14,592 solar modules from Q CELLS, the solar farm is the largest single ground-mounted PV installation in Brittany and was developed by local French renewable energy company Quadran.

Q CELLS said it was identified as an ideal module supply partner for the project because it had secured a carbon footprint (CFP) certification of 300 kg-eq/CO²/kWc for its Q.PEAK module range earlier this year.

A shining achievement for Brittany

Quadran, developer of the plant, hosted a well-attended event to mark the inauguration of the installation, which is located at Quinipily in Baud, Morbihan.

Interest in the solar farm is high for a number of reasons. As the largest such array in Brittany, covering seven hectares, the 4.5 MW solar plant will meet the annual electricity consumption needs of 4,400 local inhabitants, while offsetting emissions of 1,710 tonnes of C02 each year.

Furthermore, some 40% of the installation’s costs were crowdfunded by citizen financing – which ensures that offtaker EDF will pay an additional €3/MWh of power produced.

Maengyoon Kim, Head of EU Sales at Q CELLS, said: “The entire project at Quinipily is a wonderful achievement, and a testament to the desire of local citizens and the developer Quadran to boost the region’s clean energy footprint. As a leading solar module brand in France, Q CELLS was delighted that its low-carbon solar modules were selected for such a landmark solar farm.”

Baptiste Simon, Lead Project Developer at Quadran, added: “We decided to use Q CELLS’ Q.PEAK-G4.2 solar modules because they combine the necessary low-carbon CFP credentials with excellent performance standards, competitive LCOE and a renowned brand that we are confident will ensure reliable output for the 25+ year duration of the Quinipily plant.”