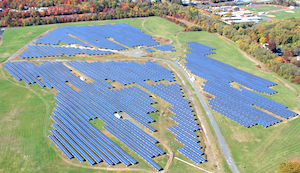 Construction has begun on a 4-MW solar PV project that New Jersey-based EPC firm Conti Solar says will be the largest landfill solar project in Ohio.

Conti Solar said that the project, which will be the first of its kind in the state and will cover 17 acres of previously unproductive land, is owned and operated by IGS Energy affiliate IGS Solar.

According to Conti Solar, solar projects built on landfills can be complex. The company already has installed more than 133 MW of landfill solar projects across the U.S.

“It was essential that we partnered with a firm that has a proven track record in developing solar projects on top of sensitive landfill sites,” Patrick Smith, vice president of IGS Solar, said in a statement.

Cuyahoga County will acquire 100 percent of the project’s energy through Cleveland Public Power.

“IGS Solar is helping Cuyahoga County reduce energy costs for the next 20 years. They have been a reliable energy partner supporting the efficient and cost-effective addition of clean renewable energy for the county’s benefit, both environmentally and financially,” Conti Solar CEO Matthew Skidmore said.