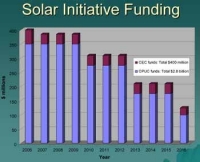 San Francisco, California [RenewableEnergyAccess.com] Today the California Public Utilities Commission (PUC) is widely expected to approve the California Solar Initiative (CSI), which will secure USD $3.2 billion for solar energy rebates in the state for the next 11 years.

More to Come: RenewableEnergyAccess.com Editor, Jesse Broehl, is attending the vote in San Francisco and will file a report from the scene. The reaction to this major incentive has already sparked the first of many ripples in the marketplace. Publicly traded solar energy stocks posted gains yesterday in anticipation of the PUC’s decision. Energy Conversion Devices