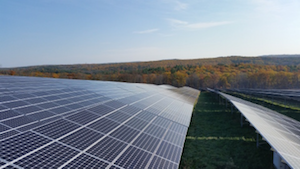 On Friday, November 18th, Clearway Community Solar announced that its newest community solar facility in Massachusetts has come online in the town of Spencer to serve the electricity needs of 1,600 residential and commercial subscribers in the Commonwealth, including six affordable housing developments.

The Spencer community solar farm — situated on 200 acres of the historic St. Joseph’s Abbey — is 100 percent subscribed and has a rated capacity of 14.7 MW. St. Joseph’s Abbey is a Trappist monastery in which the monks brew beer and make jam in order to bring in revenue for the facility.  The addition of a community solar farm on about 10 percent of its ample land not only gives the monks an additional revenue stream but it also aligns with their core values, according to a spokesperson for Clearway Community Solar.

Subscribers to the Spencer facility entered into a 20-year agreement with Clearway Community Solar and, in exchange for a fixed monthly payment, earn credits toward their electricity bill based on their allocation of renewable energy net metering credits generated by the project.

The project – which created 150 jobs during its nearly year-long construction – represents one of many community solar projects Clearway Community Solar has in the pipeline in Massachusetts and Minnesota, said NRG.

State Senator Anne Gobi said that the “project is an example of meeting the renewable energy goals that the Commonwealth has adopted. In addition, it helps the Trappists and their mission to be self-sustaining.”