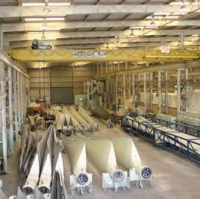 California, United States [RenewableEnergyWorld.com] Wind is, as an opening speaker at the American Wind Energy Association’s “Wind Project Profitability and Reliability” workshop said, changing the world. To take on this urgent responsibility, the industry must achieve ever-better levels of performance. There is no better measure of a wind project’s performance than it’s profitability. To build and operate a profitable wind plant, developers need to know all the factors that make a project more reliable and how to implement them.

Despite a stalled U.S. economy, wind’s 2009 capacity growth (unofficially revealed early in the workshop) was greater than in 2008, passed the 9,000 megawatt mark and set a new one-year record for the industry.

Stephen Miner, an AWEA Senior Vice President, reminded the audience that the key to wind’s successful year was the politically-won policy changes that extended wind’s production tax credit (PTC) through 2012 and provided financing flexibility by including the options to use an investment tax credit (ITC) or an upfront cash grant.

The 2-day meeting of folks who have turned wind energy into America’s second fastest-growing source of new electricity generation (after natural gas) then settled into what, on the surface, was a discussion of how to improve the operation, maintenance and safety of wind turbines but was, just below the surface, about the hottest topic in the nation right now: jobs.

For the wind industry, as for other major U.S. electricity providers, keeping the cost of generation down is everything. That begins with avoiding the expense of shoddy operations and maintenance (O&M), Marty Crotty, President of AES Wind Generation, stressed. O&M is expected to become a $5 billion, job-rich sector of the wind business going forward. Crotty pointed out that improving a hypothetical 100-megawatt (MW) wind project’s O&M by 1% could be worth as much as $2 million in a project’s net present value.

Operational excellence, Crotty summarized simply, is actually generating the MW the machine is rated to get. One factor in operational excellence is technician training. Much of the quality control in a wind project rests on the O&M technicians. Crotty showed a picture of an empty greaser discovered during routine maintenance and pointed out that such an elementary technician failure could cause problems that lead to tower shutdown or even a quarter-million dollar nacelle grounding. Another factor is worker safety. A wind project with a poor safety program, according to Crotty, will show poor financial productivity.

Mike Kelley, Environmental Health and Safety Manager for Upwind Solutions Inc., expanded on the idea of creating success through safety practices. Asked if the wind industry is in compliance with federal Occupational Safety and Health Administration (OSHA) laws, Kelley’s “no” was unhesitating. But, he said, wind turbines built two and three decades ago were not designed with OSHA compliance in mind.

Kelley explained that while there are not yet national metrics comparing the safety records of the wind industry to other energy industries, OSHA may soon change that.

Kelley’s background is in the traditional power industry and he has a longstanding familiarity with the retrofitting of combined cycle fossil fuel plants. He sees the challenge for the wind industry as similar, though on a bigger scale. Kelley said the pursuit of better safety will not slow the industry’s growth, though it will move profitable returns farther out in wind project timelines. OSHA’s intention, he said, is to push the industry toward best practices.

As the conference unfolded, presentations emphasized the relationship between project profitability, best practices in reliability and people. What emerged was a clear justification of the industry’s promise to be a wellspring of high quality jobs. From well-trained technicians to responsible project managers to electrical engineers designing safer nacelles to business development people who include the cost of the best safety practices in their project cost estimates, the industry is developing a bigger, more responsible and better paid workforce as its role in the nation’s power generation grows.

The need for knowledgeable wind talent, a panel of wind project owner-operators agreed later in the conference, already exceeds the supply.  The demand for talent could be as much as three times the number of trained people available in the near future.

Another dimension of profitability going forward will be grid operators’ ability to integrate wind into the set of resources they draw on. Though wind is intermittent and often strongest when demand is weakest, Jim Blatchford, Senior Policy Issues Representative for the California Independent System Operator (Cal-ISO) was enthusiastic about grid operators’ ability to integrate high percentages of it into California’s transmission system. Their tools include increasingly sophisticated software, increasingly smart transmission, an increasingly sophisticated electricity market and well-designed systems that require high-quality on-time data.

Michael Brower, the Chief Technical Officer for AWS Truewind LLC, agreed completely. Grid operators and project managers have the same two intentions, to maximize production and to minimize O&M expenses with trained technicians and improved safety. This requires knowledge of the wind and the wind plant.

Workshop presentations over the course of the 2-day event detailed reliability and performance issues in every part of the turbine from the gearbox and lubrications to blades, towers and the lifts that carry technicians up and down inside the towers.

The first day ended with a visit to the facilities of Knight & Carver, a San Diego blade manufacturer. With the smell of resins in the hazy air, attendees got a close-up look at how a turbine blade is made.  (Images of the factory, below.) 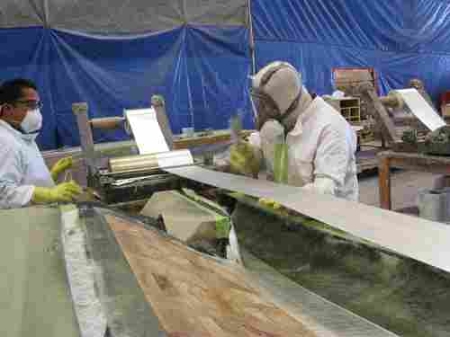 The second day’s detailed presentations had the same unifying theme: Be it collecting and monitoring data, OEM issues, how to get and use the best warranties or how to evaluate gearbox failures, the core focus of the industry is now on how to maximize production by minimizing O&M costs with well-trained, sufficiently protected workers. 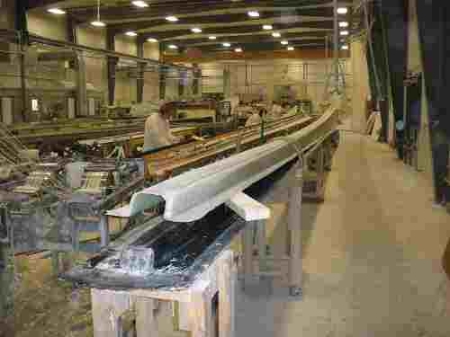 Even a presentation by Bree Raum, AWEA’s Director of Grassroots Advocacy and WindPAC, the industry’s political action committee, echoed the workshop’s theme. Raum took a few minutes to describe wind’s upcoming political agenda and its centerpiece, a strong national Renewable Electricity Standard (RES) requiring U.S. utilities to get 25% of their power from renewable energy sources by 2025. An RES is vital, Raum explained, to provide the wind industry with a stable long-term market. Such a market, she said, will drive industry growth and allow wind to fulfill its promise of providing hundreds of thousands of high quality domestic jobs.

The workshop made it clear that the industry is in the process of growing high quality, vital and rewarding jobs. Workshop attendees left the conference well aware that wind-industry jobs and the affordable emissions-free power it provides are what this nation needs most right now.

Herman K. Trabish is a writes and edits NewEnergyNews and is a regular blogger for RenewableEnergyWorld.com.