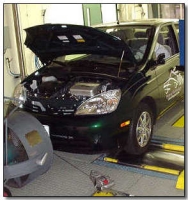 Washington D.C [RenewableEnergyAccess.com] The Union of Concerned Scientists (UCS) has unveiled what they’re calling the world’s most comprehensive independent website on hybrid-electric automobiles. In a move likely to ruffle a few feathers over in Detroit, the Web site also makes a specific effort to expose current vehicle offerings that are marketed as hybrids but are far from it.

The new site — www.HybridCenter.org — features the first interactive hybrid buyer’s guide, which allows visitors to input personal details on driving habits, location, and ownership history to receive customized information on hybrid models that fit the individual’s lifestyle and budget. Since 1999, more than 200,000 hybrids have been sold in the United States. Six hybrid models are currently on the market, with five to eight to be released in the next three years. Automakers are beginning to market vehicles as hybrids regardless of their environmental performance, according to UCS. In the Watchdog section, UCS analysts will monitor the hybrid market and expose models that don’t deliver on the promise of hybrid technology. “The hybrid label has increasing public relations cachet for automakers, but not all models are delivering equally on this promising technology,” said Kevin Knobloch, president of the UCS. “Hybridcenter.org helps distinguish the facts from the hype.” In launching their Web site, UCS didn’t directly call out any companies in their press release but they clearly have set their sights set on the line of “hybrid” trucks currently offered by GM. “Consumers should think twice before rushing off to buy a Chevrolet Silverado Hybrid or a GMC Sierra Hybrid if their main goal is to own a genuine hybrid vehicle,” said a statement under the site’s Watchdog section. “Given the environmental potential of hybrids, you would expect these new pickup models from General Motors (GM) to be truly green vehicles, like the Ford Escape Hybrid, the Toyota Prius, or the Honda Civic Hybrid–vehicles that dramatically reduce the environmental burden of each mile you drive compared to their conventional counterparts through fuel economy increases of 40 to 70 percent. The reality, however, is that GM’s claim to have hybridized their large pickups rings hollow; it turns out to be a low-tech solution with only about a 10 percent (1-2 mpg) increase in fuel economy compared to GM’s similar models. This runs the risk of poisoning the hybrid truck market, convincing consumers that all they can expect is a 1 to 2 mpg increase for their large investment.” In a more positive light, UCS said that GM at least incorporated more advanced conventional technologies to achieve a small improvement in fuel economy over their standard models. “From this perspective, GM deserves some praise for putting off-the-shelf technology to work to help slightly soften the energy and environmental impact of a gas-guzzler,” the Web site said. “Indeed, if these models were intended as a replacement for their current line of Silverados and Sierra, we at UCS might laud these efforts. But producing these vehicles in such small numbers and labeling them as hybrids is detrimental to the market, lowering expectations for hybrid technology and confusing consumers who have become interested in the technology due to the success from Ford, Honda, and Toyota.” In addition to monitoring manufacturer claims and market trends in its Watchdog section, HybridCenter.org includes an interactive “Under the Hood” feature for technophiles, a guide to hybrid consumer incentives, tips for quicker access to the most popular models, comparisons of hybrid vehicles on the market, vehicle reviews, and anecdotes from hybrid owners across the nation. The Tech Center delves into the details of hybrid engineering so anyone can understand the advantages of hybrids and differentiate a true hybrid from a “hollow hybrid.” “With gas over $2.00 per gallon, and the United States spending more than $300,000 every minute on foreign oil, the promise of hybrid vehicles has never been more important,” said David Friedman, research director of the Union of Concerned Scientists’ Clean Vehicles Program. “Hybridcenter.org takes you under the hood, explains the technology, and demonstrates that true hybrids are a smart choice for consumers-saving money at the pump, improving air quality and reducing heat-trapping emissions that cause global warming.

Open source meet your biggest challenge yet: saving the planet