More
Home O&M Monitoring When Installing Solar on a Roof with Shading, An Optimized Panel is... 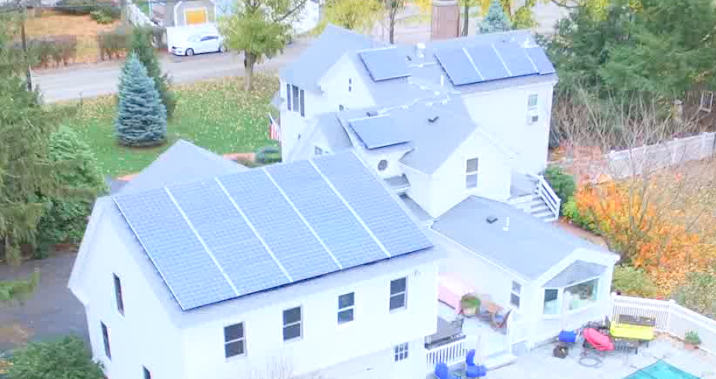 When Kristin moved to a historic home in New England, she wanted to save money on her electric bill by going solar. Her biggest concern was how panels on her roof might change the look of her home, which was built in the 1800s.

But what the installer was even more concerned about were the trees surrounding her home. Aesthetically pleasing to her but potentially a hindrance to solar production — especially in New England where once a year the trees turn beautiful colors and shed all their leaves, many of which fall on top of the modules and can cause them to stop producing.

To get around this issue, the installation company chose the JinkoSolar MX module and never looked back.

Not only was Jinko’s track record of 99.97 percent on time delivery and zero power warranty claims since 2011 an important factor in choosing the company but the module itself with its built in optimizer made for a quicker, cheaper installation and better return on investment.

“I think using Jinko modules with the optimizers really does speed up our installation. It probably is 20 or 30 percent quicker simply because the installers can get the product right up on the roof and installed rather than have to mess around with extra hardware,” said Dave Simmer who installed the system.

“Basically, there are three optimizer chips that replace the bypass diodes of the panel, and they’re performing cell string level MPPT [maximum power point tracking].  On a standard optimization type situation, you would only be getting the MPPT on a module level; here you’re getting it much more granular, so in essence in a 60-cell module you’re creating 3 20-cell modules per se,” explained Jeff Juger, Director of Business Development at Jinko Solar.

Because Kristin’s home was older, the roof has many different angles, also posing a potential problem for solar installers. By using the Jinko module, that problem was eliminated.

“One of the benefits that this Jinko product has offered us here is we’re able to install modules on different mounting planes and orientations with different pitches and not have to worry about string sizing and those sorts of things,” said Simmer. “So it allows us to really customize the system to maximize the roof space for the homeowner because at the end of the day, we’re trying to give them as much power as we can for the lowest price possible,” he added.

Kristin’s system is performing above expectations according to Simmer.

“One of the main reasons [that it is outperforming] we believe is because of the optimizers in this new Jinko panel and that’s the reason why we’re installing all our residential systems with this module now,” he said.

Most importantly the homeowner is thrilled with her system and the money it is saving her.

“That’s just the bottom line,” she said. “I save money every month on my electric bill.”