More
Home O&M Asset Management Whatever Happened to Jatropha, and All Those Other Wonder Feedstocks? Part 3 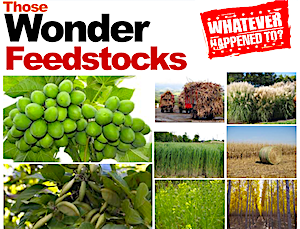 Before the start of Advanced Bioeconomy Feedstocks & Supply, we are looking at more ongoing activity in feedstocks. And don’t miss Part Two, where we looked at Camelina, Forest Waste and Jatropha.

Last September, Boston-based Ukraine Agro Valley Association said it aimed to set up 20 biomass power plants around the Ukraine in order to wean the country off of Russian gas. The company wants to use miscanthus as feedstock, with 10,000 acres of the crop surrounding each of the 20 plants that would then be converted into pellets and fired to produce heat. Each factory would cost around $20 million to build, with hopes for funding to come from the US and Europe and ideally the first plant online in 2017.

Last March, Repreve Renewables was selected to provide the agricultural and business development services for the University of Iowa’s Biomass Fuel Project. The company’s giant miscanthus, planted and established by its Accu Yield system, will be used as fuel in the university’s power plant. Repreve’s next step involves securing land commitments for 2,500 acres in the Iowa City Area. The project aims to increase UI’s power plant’s renewable fuel consumption and reduce the use of coal, all part of the university’s sustainability goal of 40 percent renewable energy outlined in its 2020 Vision.

Last September, Enerkem announced it had raised C$152.6 million and has initiated the production of biomethanol from non-recyclable household garbage at the Enerkem Alberta Biofuels full-scale facility in Edmonton, Canada. The financing was comprised of a recently accessed C$29 million debt facility from Integrated Asset Management Corp.’s (IAM) Private Debt Group as well as C$50 million in private placements from current investors and C$73.6 million of debt from two other lenders, closed over the past year. This funding will be used for the product expansion of the Edmonton facility and the company’s global growth.

In June of last year, United Airlines announced a $30 million direct investment in advanced biofuels developer Fulcrum BioEnergy, obtained an option to invest in five future commercial-scale aviation biofuels plants, and signed offtake agreements for up 90 million gallons of biofuels per year. The offtake contracts are worth an estimated $1.58 billion over the 10-year offtake span, based on the current jet fuel price of $1.76 per gallon, according to Digest calculations. The five new plants are expected to range in size between 30 and 60 million gallons.

US Renewables Group, Waste Management and Rustic Canyon, among others, have also previously invested in Fulcrum BioEnergy, which converts municipal solid waste diverted away from landfills into diesel and jet fuel. Fulcrum’s first commercial facility is expected to open before the end of 2017.

On the negative side, British Airways is “partly blaming” lack of government support for having to scupper its Green Sky project with Solena to produce 16 million gallons of aviation biofuel annually from London’s MSW beginning in 2017. The government has failed to include aviation biofuels in its Road Transport Fuel Obligation policy that provides incentives for road transport biofuels, a policy failure the company says led to investor reticence in the project. Solena entered bankruptcy proceedings last fall, so BA is looking for other waste-to-biofuels technology partners to bring the project back on the table, hopefully with future government support.

In December, we reported that Scania and the Malaysia Innovation Agency have signed an agreement to jointly develop opportunities for biofuel production MSW including an initial scoping study that will look at identification of possible project locations, price and market demand projections and economic and operational feasibility. The technology to process MSW nor the type of fuel to be produced was identified in the announcement of the MOU. Scania has engines that can run on ethanol, biodiesel and biogas.

Last week, we reported that , a small stand of poplar trees harvested from a University of Tennessee AgResearch Center is set to help scientists progress further down the path toward low-cost, high-quality biomass and a bioeconomy. Located on UT’s East Tennessee AgResearch Center in Blount County, the 10-acre plot of hybrid poplars was planted just over four years ago and the now 30-ft trees are expected to produce some 60-100 tons of woody biomass — a crop Tennessee and other Southeastern farmers could potentially sell to biorefineries for conversion into advanced fuels or other biobased products.

The harvest is part of a five-year $15 million multi-disciplinary research and development effort funded by the U.S. Department of Agriculture to reduce barriers to the development of the Southeastern bioeconomy.

We’re not yet sure whether poplar will be involved, but last week, Leaf Resources and ZeaChem signed a joint venture agreement to establish a Glycell based project in the USA. The new agreement advances the relationship between the two companies from an October 2014 Collaboration Agreement. That previous agreement covered ZeaChem’s evaluation of the Leaf Glycell process for the production of fermentable sugars at ZeaChem’s demonstration plant at Boardman, Oregon.  The trials indeed used poplar as a feedstock.

Leaf’s Glycell Process can produce cellulosic sugars at under $50 per tonne when co-products are included. This compares with $220 per tonne for sugars produced from the conversion of corn starch, the cheapest alternative and $280 per tonne for raw sugar.

In January we reported that producing biofuels from poplar trees at commercial scale has been negatively impacted by low fuel prices as well. More than four years after the University of Washington received $40 million from the USDA to research tree-based biofuels, commercial production still requires oil to be above $80 per barrel. At $100 a barrel, the fuel would have a lot of demand, the program’s researchers say. Washington State University was also among the $136 million research consortium, the largest ever awarded by the USDA. The research, led by the University of Washington, will seed the world’s first wood-based cellulosic ethanol production facility. The handful of other cellulosic ethanol factories use agricultural waste to convert feedstock into sustainable transportation fuels.

“We’ve established that poplar is a viable and sustainable feedstock for the production of fuels and bio-based chemicals,” said Rick Gustafson, a UW professor of bioresource science and engineering, who leads the project. “We’ve provided fundamental information that our industry partners can use to convince investors that production of fuels and chemicals from poplar feedstock is a great investment.”

We’ll finish up this feedstock overview in Part Four with a look at Sweet Sorghum and Switchgrass.