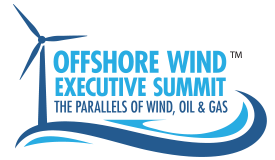 PennWell Corporation last week announced the launch of the first conference dedicated to bringing together the U.S. offshore oil and gas industry and the U.S. offshore wind industry for information exchange and networking. The Offshore Wind Executive Summit will take place in Houston, Texas from August 9-10 at the Norris Center in CityCentre.

There is a vast opportunity to make money by building offshore wind farms in the United States and according to Jeff Grybowski, CEO of Deepwater Wind, the offshore oil and gas industry already possess the knowledge, equipment and work force to tap into it

“From a construction perspective, it doesn’t matter if you are putting a drill rig on top of [a foundation] or a wind turbine, it’s the same thing,” said Grybowski in an interview with Renewable Energy World, the organization that created the conference.

The six conference education sessions will focus on the business opportunities for offshore oil and gas companies interested in working in the offshore wind industry: Logistics, Infrastructure and Project Development; Foundations and Cables; Risk Management; and Jobs, Training and HSE.

In addition to the educational sessions, conference attendees will be able to network during the multiple coffee and water breaks, breakfasts, lunches and a networking party.

This is the first event focused exclusively on bringing the well-established U.S. oil and gas industry together with the nascent U.S. offshore wind industry.

Offshore oil and gas companies that have successfully entered the offshore wind industry such as Gulf Island Fabricators, Keystone Engineering, Blue Water Shipping and Montco, will be in attendance at the event to share their expertise.

Because of the Merchant Marine Act of 1920, aka “The Jones Act,” all marine activities related to the transport of goods conducted in U.S. waters must be done on U.S.-flag ships that were constructed in the United States, owned by U.S. citizens, and crewed by U.S. citizens and U.S. permanent residents. This gives the offshore oil and gas industry a unique opportunity to enter a new line of business.

It is estimated that over the next decade, more than 20 U.S. offshore wind farms will be constructed, representing thousands of megawatts of power.

To learn more about the conference, please visit the website, OffshoreWindSummit.com.