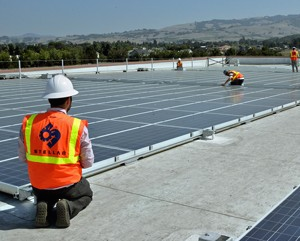 Coming on the heels of yesterdays announcement that more than 60 percent of corporate investors plan to put capital into the solar industry in one way or another, an announcement today shows the increasing vibrancy of the C&I solar sector.

REC Solar announced that it acquired Stellar Energy, adding more than 60 MW from 62 solar projects installed or under construction to its customer portfolio, bringing its portfolio to more than 200 megawatts, installed or under construction. New clients joining the REC Solar portfolio include leaders in the agriculture, food & beverage, manufacturing, mining & energy and entertainment industries, as well as school districts and municipalities. REC also picked up an additional 28 megawatts of operations and maintenance contracts, increasing the company’s O&M portfolio to more than 200 megawatts as well.

REC Solar, the majority of which was acquired by last year Duke Energy — the largest electric power holding company in the U.S. — has installed more than 175 MW of solar capacity in more than 500 commercial systems across the country, including businesses, governments and non-profits.

Allen Bucknam, CEO of REC Solar believes the C&I space is heating up. “A lot of good things are happening,” he said acknowledging however that he wasn’t sure if what he was observing was growth of the entire market or just his own company’s growth. The purchase of Stellar Energy assets positions the company well for the future, Bucknam said, as does the support it receives from Duke.

In 2017, the commercial solar investment tax credit (ITC) will drop from 30 percent to 10 percent and Bucknam thinks at the time the industry could plateau.  “Margins will be tighter,” he said, adding “companies that want to participate need to have access to the broad market.”

The acquisition of Stellar Energy adds more than just pipeline. REC Solar has hired most of the company’s employees. Bucknam said it was a “natural” acquisition in terms of team and strategy. “Their people fill holes we had,” he said.

Although REC Solar is “very committed to rapid growth and willing to explore all possibilities,” according to Bucknam, it does not have its sights on any other companies at this time.

The sale allows Soligent, parent company of Stellar Energy, to put a greater focus on the services that it provides to solar developers, such as equipment supply, financing and software.

Financial details of the transaction were not disclosed.

Watch for more insight from executives about life after the ITC drops in the July/August issue of Renewable Energy World magazine. More about the magazine here!