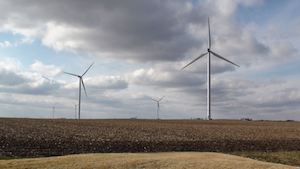 The American Wind Energy Association’s new report on the U.S. wind market says the U.S. added around 2,000 wind turbines last year. What if the U.S. could add another 2,200 turbines’ worth of clean energy without putting a single turbine in the ground?

The good news: We can. We just need to take advantage of data and AI to keep turbines from breaking down. If we eliminate avoidable downtime, the U.S. could add the equivalent of 2,200 turbines, or 12 terawatt hours of clean energy, without installing another wind turbine. That’s enough to power every home in Chicago for a year.

Earlier this year, in our Untapped Energy report, we analyzed the opportunity for the U.S. wind energy industry to produce more energy. The wind fleet is currently at 94 percent availability, but the numbers above show the immense impact we could have by increasing it to 99 percent. Each one percent we increase availability is equal to adding 450 new wind turbines, which could power 222,000 homes annually.

New artificial intelligence technology is creating more energy from the same wind. Berkshire Hathaway Energy is doing this in Iowa with its wind farms. This video takes you inside that story.

AWEA’s report highlights several other remarkable facts, including that wind energy now accounts for 30 percent of electricity generating capacity in Iowa, Kansas, Oklahoma and South Dakota. In New Mexico, wind turbines are being installed at a breakneck speed, with more than 570 megawatts of capacity added last year — more than any other state. Wind now accounts for 6.3 percent of U.S. electricity. Those numbers could be even higher without downtime.

Wind is now the lowest-cost energy option in many parts of the country. Prices have fallen two-thirds since 2009. States are looking for the most cost-effective bid in their renewable procurement auctions. Energy companies can meet these challenges by ensuring their wind fleets produce more energy by staying available 99 percent of the time.

This article was originally published by Uptake and was reprinted with permission.