In order to get the most out of these heating systems, properties should be energy efficient. Therefore, customers must undergo a Green Deal Assessment to ensure proper insulation, etc. before they can take advantage of the incentive program. Tariffs for each technology are as follows: 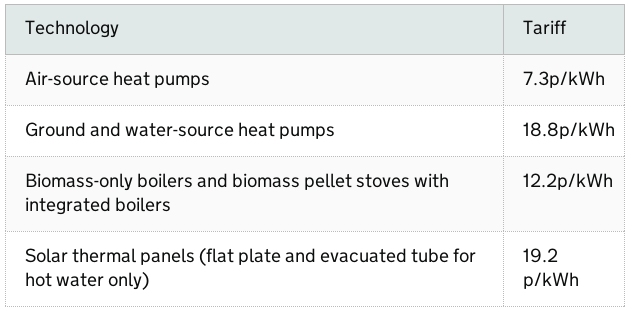 Payments will be made to homeowners quarterly over seven years, according to Bloomberg.

“This is the first scheme anywhere of its kind in the world,” U.K. Energy Minister Greg Barker said. “Not only will people have warmer homes and cheaper fuel bills, they will reduce their carbon emissions, and will also get cash payments for installing these new technologies.”

Our original story when the RHI program was announced from July 2013:

UK homeowners could be paid hundreds of pounds a year for heat generated by solar thermal panels, biomass boilers and heat pumps under the nation’s Renewable Heat Incentive (RHI), energy and climate change minister Greg Barker announced today. The RHI was initiated in 2009 but there have been significant delays in setting tariff levels, creating uncertainty in the renewable heating sector. Today’s long-awaited reveal was welcomed enthusiastically by the industry.

The program is designed to boost efficiency, reduce emissions and cut bills. Political debate over the rising cost of Britain’s energy bills last month prompted Ofgem, the regulator, to start a review of the utility industry. That may cause a delay in investment in power generation and raise the risk of shortages. The U.K. wants 15 percent of all energy, including heating, to come from renewables by 2020.

Payments will be made on a quarterly basis for seven years. The Department of Energy and Climate Change (DECC) says the tariffs have been set at a level that reflects the expected cost of renewable heat generation over 20 years. In most cases, it says, payments will be made based on the estimated heat demand of each property. DECC will offer an extra set payment of £230 (€266) per year where consumers take out metering and monitoring support packages for heat pumps, and £200 (€231.54) for biomass boilers.

Homeowners can also get help with the up-front costs of renewable heating under the Green Deal, which allows people to pay for energy efficiency improvements including renewable heating systems through savings on their energy bills. Money-off vouchers are also available under the Renewable Heat Premium Payment (RHPP) scheme.

Cathy Debenham of consumer information group YouGen said, “People wanting to invest in renewable energy technologies to heat their homes will be able to do so with confidence at last following today’s announcement. The uncertainty about tariff rates that we have had for the past four years has meant many people putting investment on hold, or installing a fossil fuel boiler instead. The publication of the rates and the eligibility criteria means that people can finally make an informed decision with all the information they need.”

Roger Webb, director of the Heating & Hotwater Industry Council (HHIC), also welcomed the incentive, saying that it “gives the industry confidence to invest in renewable heating products helping to protect and create jobs.”

“We would of course like the tariffs to be higher,” Webb continued, “but we understand the difficulty of introducing a government-funded scheme in the current economic climate. We will also be urging DECC to monitor uptake and if necessary to increase tariffs if they are not driving up product sales.”

And Dave Snowden, chief executive of the Micropower Council, said: “The proposals for increased levels for biomass, ground source heat pumps and solar thermal are good news for industry. With deployment levels in the non-domestic RHI so far having been unsatisfactory, we have been awaiting this tariff review consultation announcement for some time. The introduction of the new tariff levels would help provide the boost needed to increase deployment, not only providing support to industry but also helping the UK on its pathway to renewables.”

DECC says it is currently finalising details of the expansion of the non-domestic RHI scheme, which has been running since 2011. Delays in setting non-domestic tariffs mean that some projects using technologies such as direct-air biomass heating have been cancelled, the Renewable Energy Association (REA) said. DECC says it aims to announce the tariffs in the autumn and introduce a final version of the scheme in spring 2014.

“Project developers have been working on the assumption that [non-domestic] tariffs would be known ‘this summer’, not ‘this autumn’,” the REA said. “Inevitably this means a number of the most cost-effective renewable energy projects currently in development will have to be scrapped as investment decisions cannot be made on schedule.”

Lead image: solar thermal panels in the UK, via YouGen