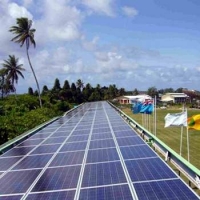 Tuvalu [RenewableEnergyWorld.com] Amid worsening climate change-related problems for small island states, Tuvalu has established a national goal of being powered entirely by renewable energy sources by 2020.

Government officials and the donors of Tuvalu’s first large-scale solar energy system alike hope the moves help inspire much larger nations later this year in negotiations of a successor to the Kyoto Protocol agreement on climate change.

The solar system installed on the roof of Tuvalu’s largest football stadium now supplies 5 percent of the electricity needed by that nation’s capital, Funafuti.

In the process, it has also reduced the risk of diesel spills around the archipelago of four low-lying coral islands and five atolls.

Based on the project’s success, the country now aims to be powered entirely by renewable energy sources by 2020, a goal requiring an investment estimated at just over $20 million, according to government estimates.

At their summit earlier this month in Italy, the richer G8 countries committed to help finance efforts by poorer nations to battle climate change.

Tuvalu’s first grid-connected, 40-kilowatt solar energy system was implemented under the leadership of Japan’s Kansai Electric Power Co with the support of the Tokyo Electric Power Company, both members of the e8, an international non-profit organization of 10 leading power utilities from G8 countries.

“There may be other, larger solar power installations in the world but none could be more meaningful to customers than this one,” says Takao Shiraishi, General Manager of the Kansai Electric Power Co.

“The plight of Tuvalu versus the rising tide vividly represents the worst early consequence of climate change,” he adds. “For Tuvalu, after 3,000 years of history, the success of UN climate talks in Copenhagen this December may well be a matter of national survival.”

The Tuvalu government is working to expand the initial US $410,000 e8 project from 40 to 60 kilowatts, and will extend solar power to outer islands, starting later this year with the commission of a US $800,000, 46-kilowatt solar power system for the Motufoua Secondary School in Vaitupu, being implemented with the support of the Italian government.

With a population of 12,000, Tuvalu is halfway between Hawaii and Australia, 26 square km in size, with a maximum elevation of just 4.5 meters and most of its land less than a meter above sea level.

Tuvalu is already experiencing flooding amid predictions of a large sea level rise this century.

Says Kausea Natano, Minister for Public Utilities and Industries: “We thank those who are helping Tuvalu reduce its carbon footprint as it will strengthen our voice in upcoming international negotiations. And we look forward to the day when our nation offers an example to all – powered entirely by natural resources such as the sun and the wind.”

The e8’s Tuvalu project was initiated after a series of regional renewable energy feasibility workshops, jointly organized by the Pacific Power Association (PPA) and the e8.

e8 members agreed to donate and install the first facility, and are monitoring its success and building local expertise to ensure the project’s sustainability.

Johane Meagher, Executive Director of the e8, expressed thanks for the support of the Pacific Power Association, with whom the e8 has established a long term collaboration to support development of small scale projects in the Pacific Islands and strengthen the capacity of the engineers and technicians of the islands’ utilities to enhance renewable energy power in the Pacific region.

Meagher said, “We are proud of the role the e8 has played in creating this clean energy project, which was intended to generate far more than just electricity in Tuvalu. It is a message to the world about the urgent need to promote sustainable energy development and reduce greenhouse gas emissions on a massive scale.”

Sidebar: Who are the e8?

Created in the wake of the 1992 Rio Summit, the e8 is a non-profit international organization, composed of 10 leading electricity companies from the G8 countries, whose mission is to play an active role in the international debate on global electricity issues and to promote sustainable energy development through electricity sector projects and human capacity building activities in developing and emerging nations worldwide.

The e8, in partnership with UN agencies, key international organizations and local partners, contributes to enhancing access to energy for some of the two billion people around the world still without access to this essential resource.

The e8 mission, with the fight against climate change and sustainable development at its core, translates into three key objectives:

The e8 members are: