A wind farm has been designed in which the array of machines has been modelled on the fluid dynamics which surround schooling fish. According to BBC reports, aeronautical engineer Robert Whittlesey of the California Institute of Technology (Caltech) said, “The fish aim to align themselves to optimise their forward propulsion,” and he added that this tendency can be adapted in a turbine array to maximise energy extraction. 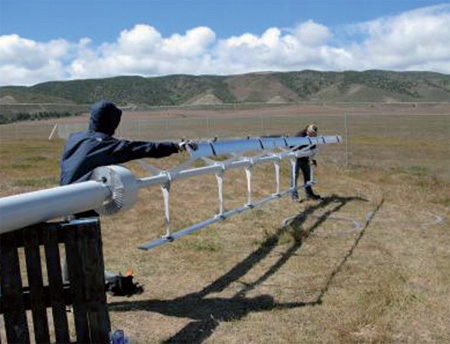 The new design uses closely-spaced pairs of counter-rotating turbines that funnel air to their neighbours, with little energy lost to turbulence. Not only do neighbouring machines benefit from lower turbulence, but the funnelling effect is also important. In fact, power generated by the paired turbines can actually be greater than that from the turbines working independently, the research reportedly indicates. In modelling tests, a turbine five rows in an array back still generates 95 percent of the output of one on the front row. The researchers believe that a wind farm based on this closely-packed design could produce around 10 times that of current designs.

A study analysing measured icing and comparing the figures to model data on Swedish utility group Vattenfall’s machine, which began in 2010, is now being followed up by an analysis of production data and ice problems on other sites in northern Sweden.

The project will also investigate available mitigation technology, various solutions and their costs. This will be done in cooperation with turbine producers, Vattenfall says in a statement.

The usual approach to de-icing is to install heating in the rotor blades. However, that is not enough to eliminate production losses entirely or to completely eliminate the risk of dangerous ice throws, though it does decrease the risk. Other measures may include replacing sensors, adding new ones and mounting cameras. The project is due to be completed by the end of June 2012.

A two-bladed wind turbine design, the Vergnet SA, GEV HP 1 MW, has received a Statement of Compliance from GL Renewables Certification for its design. This Class IIIA is also fitted with a novel, and patented, lowering system making it possible to lower the upwind part of the nacelle for maintenance and servicing.

The Statement of Compliance confirms that Vergnet’s Design Assessment has been carried out according to GL guidelines and verifies that the turbine complies with the requirements of the respective standards regarding load assumptions, strength verification and safety concept.

A bird’s eye view of the top of a wind turbine, which can be used to carefully examine the structure and blades from any angle, while engineers a safely at ground level is provided by The AutoCopter™. This UAV (unmanned aerial vehicle) provides a mobile flying platform for any type of viewing and recording, for determining present conditions and/or for documentation of completed repairs, inspections etc. without risk to personnel.

The HD65 AutoCopter, for higher altitudes, is just over 8 feet long (2.49 metres) with a rotor Span of 2.50 metres and will fly to the necessary height of several hundred metres. Their ability to survey the area from above provides a perspective on current conditions or damages. Stabilised software and AutoPilot models are available. Features include full automatic takeoff, waypoint (GPS) tracking and automatic landing.

Its developers say the Autocopter costs less than $2.00 per hour to fly, will fly all day on 19 liters of gas, and produces the same visual results as a manned helicopter.

Mirus International has introduced its GENLINK™ DPNL (Dissimilar Pitch Neutral Limiter), a multiple winding reactor which is installed in the common neutral of paralleled sources.

“When paralleling equipment such as generators or other distributed generation sources to each other or the utility supply, it’s critical that voltages produced by this equipment match as closely as possible,” explains Tony Hoevenaars, president of Mirus International. “To properly match voltages the RMS values need to be similar as well as the instantaneous values which are determined by the voltage waveshapes. If not properly matched, circulating neutral currents can result.”

This can also be true when energy sources such as wind are paralleled with the utility. In these circumstances, neutral circulating currents will appear which, if left untreated can cause equipment to overheat and false tripping of overcurrent protection equipment.

The DPNL, once installed in the common neutral between dissimilar generators or the generator and utility supply, adds impedance.